Have you ever wanted to see Saturn the way those at NASA do? Thanks to this WebCast, you can!

Technically, not NASA, but a team of astronomers at Keck Observatory in Hawaii are using two of the world’s most powerful telescopes to study Saturn’s resplendent Northern Lights.  Tomorrow morning, (April 21) they will webcast live views of Saturn’s auroras from there.

During the webcast, astronomers from the team will talk about their most recent and most exciting accomplishments. They are in the middle of a study of Saturn’s auroras and weather, which is changing as the planet’s northern hemisphere is entering its seven year spring.

The facilities at Keck have already helped the astronomers make one amazing discovery, water dripping from Saturn’s icy rings into the planet causing much rainfall.

This is an incredible event!  Just think of the endless possibilities.  The Solar System is a stunning place with unexplored, unknown wonders.  Nasa and its space probes are on a path to discover – it is just the beginning.  We must not succumb to boredom, to become indifferent.  It is common now to see the incredible, jaw-dropping images that Hubble, Cassini, Messenger and other spacecraft beam back to us earthlings.  We gasp at their beauty.  Well, now we have the chance to marvel yet again.  Saturn will put on a breathtaking display tomorrow.

The best part is that no space probe is needed to see it.   Simply set up a telescope in your back yard or window and sit back and enjoy the show!

Some info about Saturn:

Saturn is the second largest planet in or solar system (the first being Jupiter) and the 6th furthest from the sun. Saturn’s name comes from the name of the Roman god for agriculture, Saturn.  His astronomical symbol  (♄) represents his sickle.

Saturn’s radius is nine times that of the earth while only one eighth the density.  Because of its larger volume, Saturn is more than 95 times as massive as Earth. 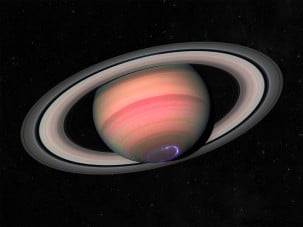