I Ride My Carry-on Camera Case Through the Airport.

Actually makes your next visit to ‘Airport land” fun.

“MOTORIZED CARRY-ON LUGGAGE THAT ALLOWS YOU TO RIDE IT AND MAKES TRAVELING FUN.” – K. O’DONNELL

Let it carry you.

Even with the space taken by the motor and battery, it still has 2,000 cubic inches of interior space for your stuff. It can safely carry riders up to 260 lbs.

The rideable carry-on bag was created by Chicago inventor and world traveler, Kevin O’Donnell. He got the idea when he was lugging his children around the terminal on top of his suitcase.

He thought: “Why can’t we ride our luggage and get to where we’re going faster with less stress?”

No more exhausting, mad dash through the airport dragging your camera case and the rest of your critical gear to make your flight. Now, you ride swiftly and safely to the gate no matter how far away.

O’Donnell turned to his biker buddy, Boyd Bruner, to create the prototype.

The invention can travel at eight MPH up to six miles on a single battery charge. It’s lightweight, and can easily convert from motor to pull-behind use. The unit ships with dual USB charging ports for your electronic gear and optional GPRS-GSM tracking device.

I’ve used the Modobag on a recent multi-camera video production and webcasting gig in Valencia, Spain.   I even took it to the shoot and was able to ride around the huge facility with a tripod and other camera gear in my backpack.

So, I got tons of B roll of the exterior of the magnificent City of Arts and Science in Valencia, Spain to load into the TriCaster for our WebCast.

We also flew our Octocopter drone over the entire facility and streamed right from there. 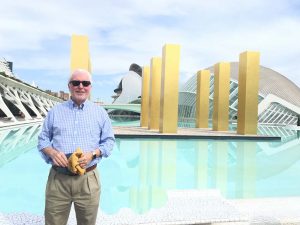