A refreshing and insightful experience for women filmmakers. 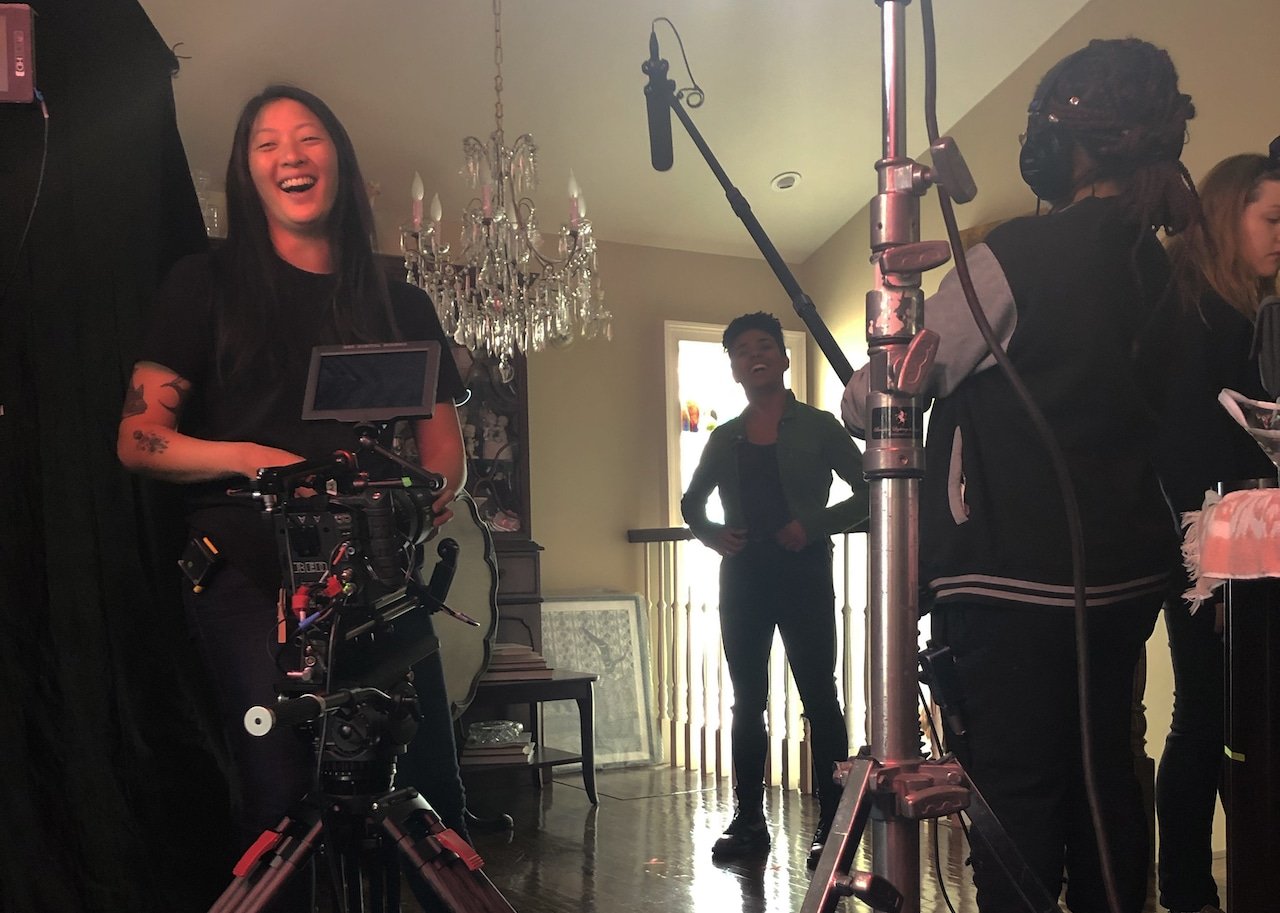 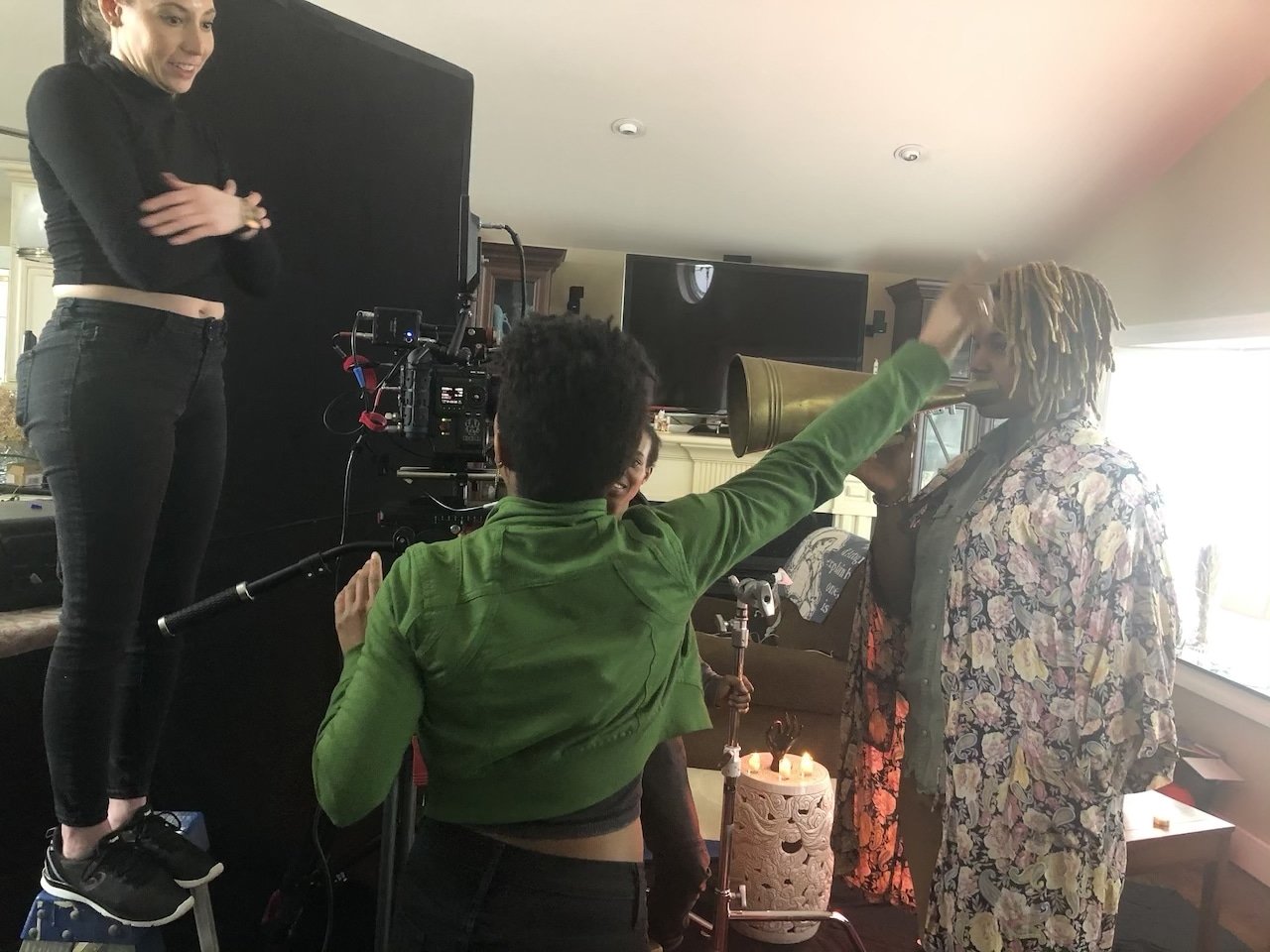 The challenge was hella intense and I’m about to tell you all about it, so hold on.

First, a comment on the necessity of organizations like this in the industry. As a young filmmaker, this was my first experience working on a set where the crew was not majority male. I’ve come to expect being one of few women in a crew.  It is often intimidating in work settings as collaborative as film production. Bro culture is big in this industry. I don’t want to get too deep into how problematic that can be when you’re a woman trying to make a living in film.  But, remember women are strong and resolute!

Participating in this challenge connected me to so many talented women that I don’t know where to begin, so I’ll start from the top. Before being accepted into the challenge, candidates had to apply with reels, writing samples and works relevant to the position they wanted to take on in the crew. Once we were selected, the challenge organizers placed us in teams, all named after famous women directors in the industry. There were seven teams in total, all composed of crews of around 30 women filmmakers. I was placed in team Banks, after Elizabeth Banks. Other teams were named after Masai Martin, Alysia Reiner, Kerry Washington, Mindy Khaling, Eva Longoria and Lena Waithe. The organizers assigned each participant their position in the crew. I was the Art Director and Graphic Designer for this challenge. Let me tell you, I was extremely excited to be in charge of the aesthetic elements of this production. 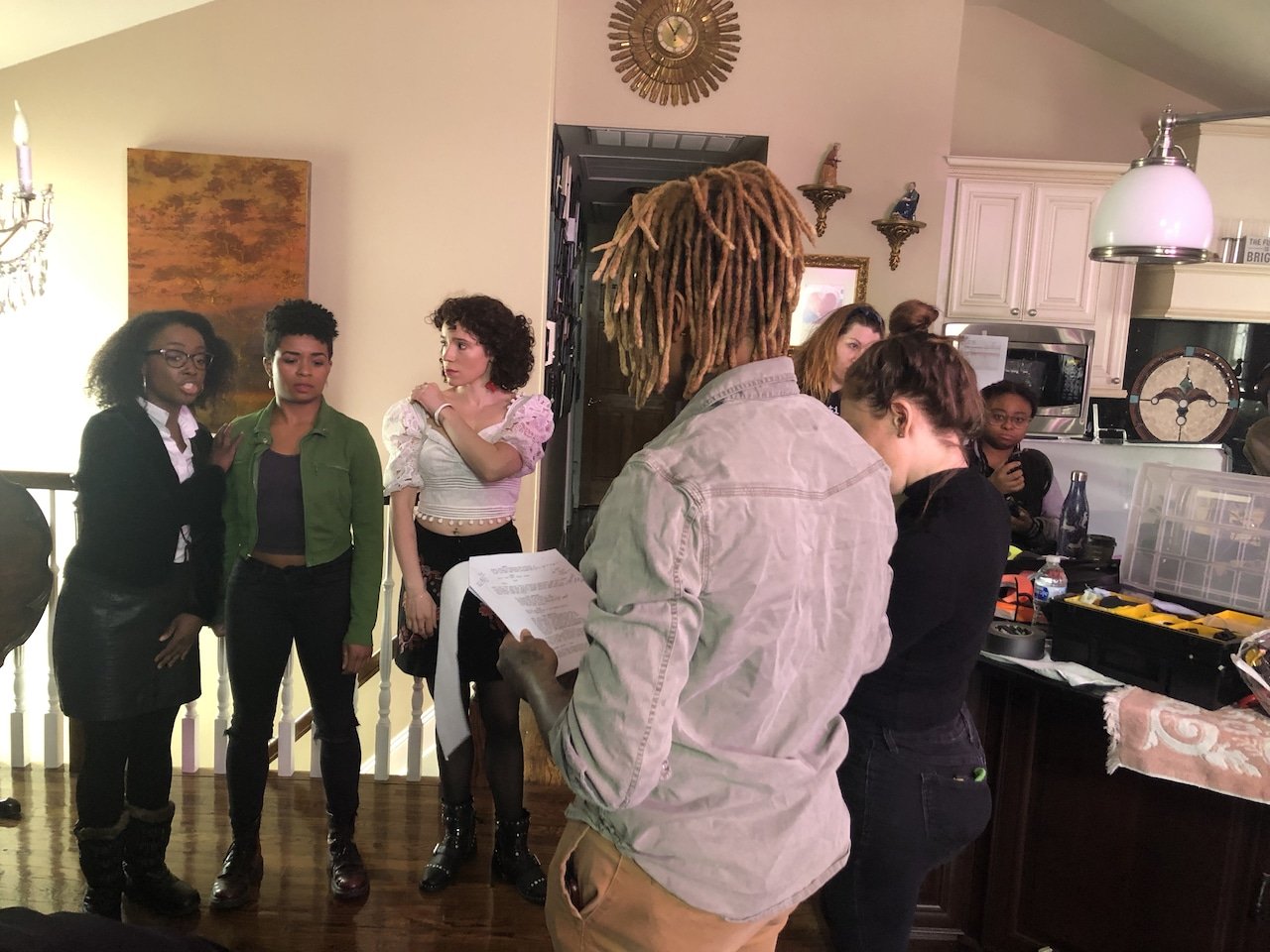 Before the start of the challenge and after making the call sheet for each crew, directors, writers and actors had a meeting to familiarize themselves with each other. I was lucky to have a great producer on my team, who was communicative and on her game the entire time. She made it possible for team members to find each other and better prepare themselves for the challenge.

Several rental houses donated rental equipment for the crews to use during the challenge. There was an equipment training day for DP’s and AC’s to learn how to work with the camera equipment. Our writers met to brainstorm ideas for the possible genres we might get during the challenge, and we scouted possible locations that could be versatile enough to shoot the different genres in. We had our pre-production meeting, where the whole cast and crew gathered around a table and discussed the expectations for the challenge. This was a fun experience, because we were able to get acquainted with each other before we were stuck together for shooting this film on the weekend. A favorite moment of mine was finding out during ice breaker that the Director was a Scorpio who had eaten a scorpion, because I too am a Scorpio that has eaten a scorpion and would use it as my fun fact. I could tell then we would all work well together.

The challenge was set to start on Thursday at 6PM. Crews would gather for a kick off party where we tune into the genre reveal on Facebook Live. In addition to the genre we also found out a prop that we would need to include in our films. Our team’s genre was revealed last for dramatic effect I think because I was biting my nails the entire time they were announcing the other team’s genres. Dramedy, and the prop we had to use was a tacky souvenir. 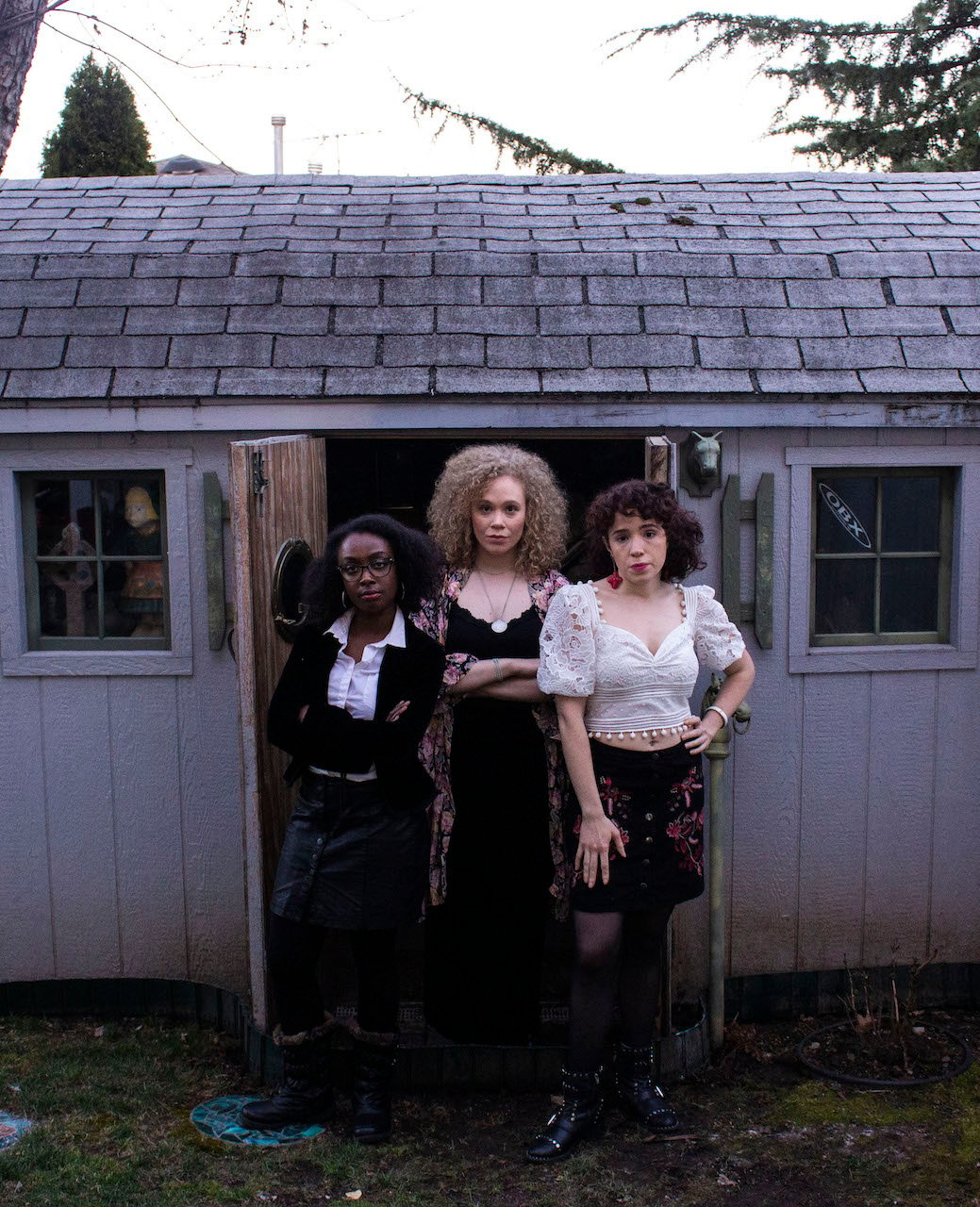 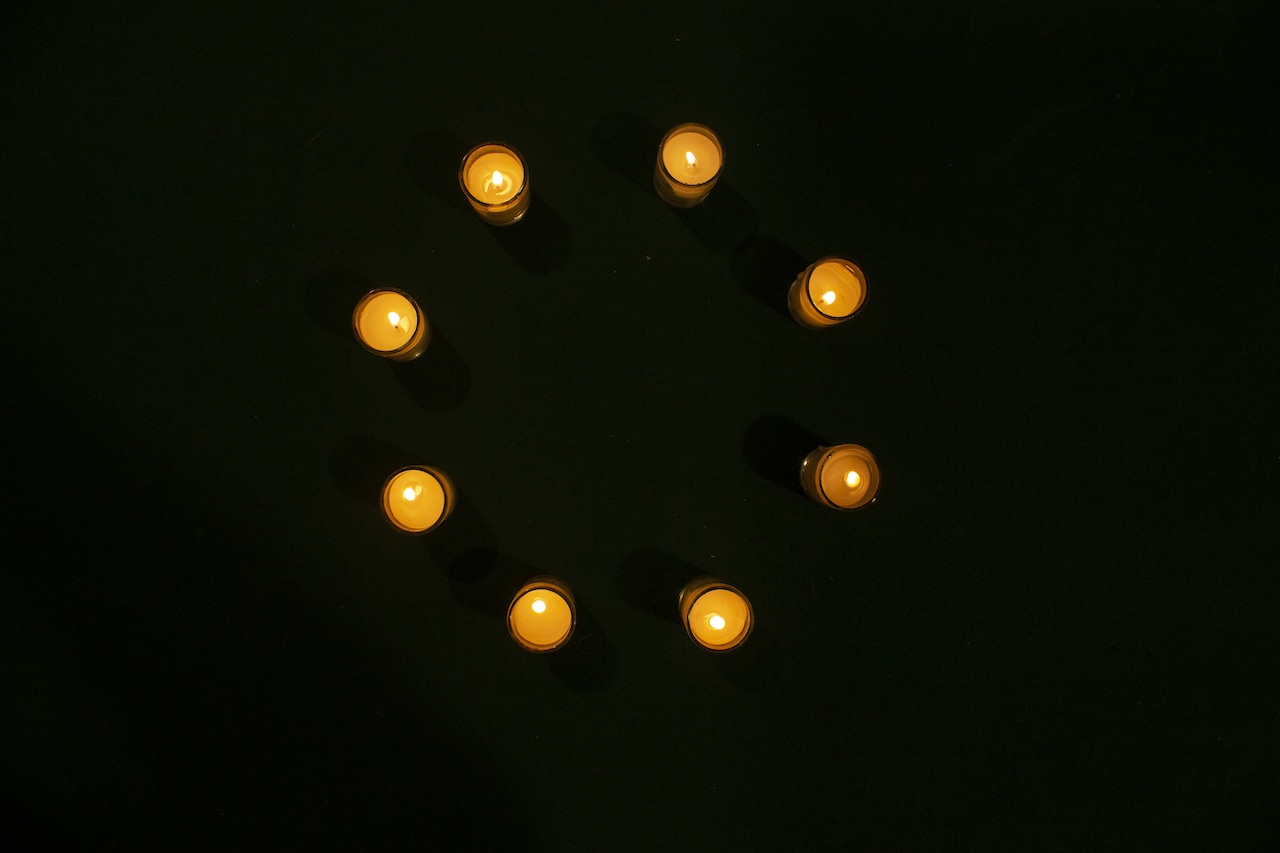 Our Team had agreed to shoot in the Assistant Director’s childhood home in Staten Island. So once we had the genre we arranged to move the equipment to the location, while the writer set off to write the Dramedy short we would be shooting and editing that weekend. As one of the directors I was part of the initial group that arrived at the location to brainstorm where scenes would take place and what resources were available for the shoot.  The house was huge and full of items and knickknacks usable for anything they might throw at us. During our wait for the writers to give us a draft of the script our team bonded and shared stories of sets they’ve worked on, and current projects that are taking place. Some people shared some tea on certain big time productions in the making right now, but I’m not here to gossip about that, although if you really want to know… no we don’t have time for all that, I have a challenge to cover.

A little after one in the morning and after a quick nap, we rushed to our Google Drive folder to receive the first draft of the script from the writers. It was interesting,  in a … cult sort of way. But very quickly the Director, the DP, and I started drafting  our scenes and shots that we wanted to get. From the first read of the script we kind of got the vibe that it was going to be a seance kind of  film. Then we set off on a whole night of planning and storming around before the crew arrived that morning. We had two hours of sleep in total, but we were full of adrenaline to get started.

First thing that went wrong was that the van that was picking up the crew in the city was delayed by a few lost souls. Once that was clear it was the real beginning of the challenge, one of our actresses had some issues with the script. She made sense, so we had to call our writers to discuss rewrites. This is where it really got dramatic as we found out there were creative differences between the writers. Each writer wrote a different rewrite and we decided to pick parts of each to make the final script.

Shooting was complicated.  We were aiming to get the best footage possible. I had a lot of fun dressing the set for each scene. That Friday night it rained and it was cold, however, that did not stop our team from going outside and filming some establishing shots and scary night shots. Complications did arise the next day when the weather completely flipped and all of a sudden it’s nice and sunny out. For this the solution was to wait until the night. We would be shooting in a cemetery. This arrangement placed us to end shooting a little later on Saturday night than we had anticipated. The extra day time we used to shoot a possible, more in the tone of a dream second ending. This was when the director got all those emotional bits from our lead actresses. This is when shooting was intense and the stress was felt. We were all a little nervous that we might not get this done on time. 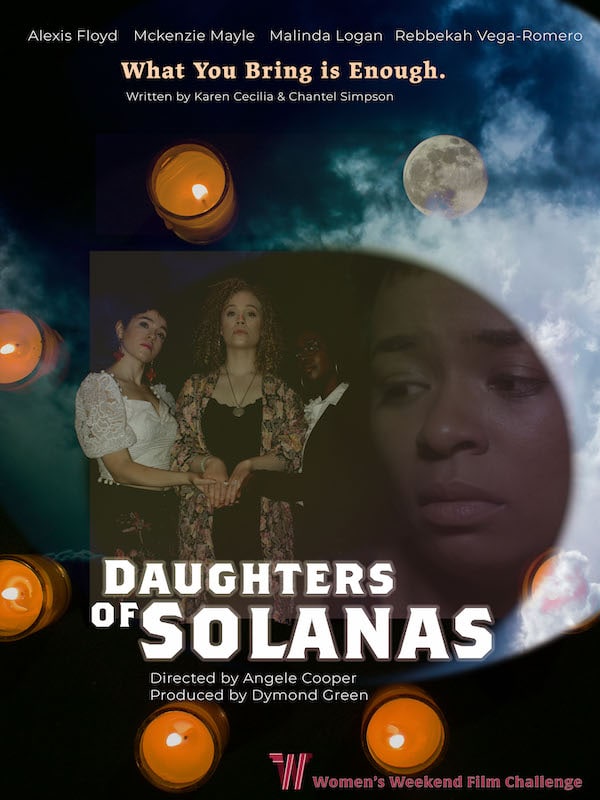 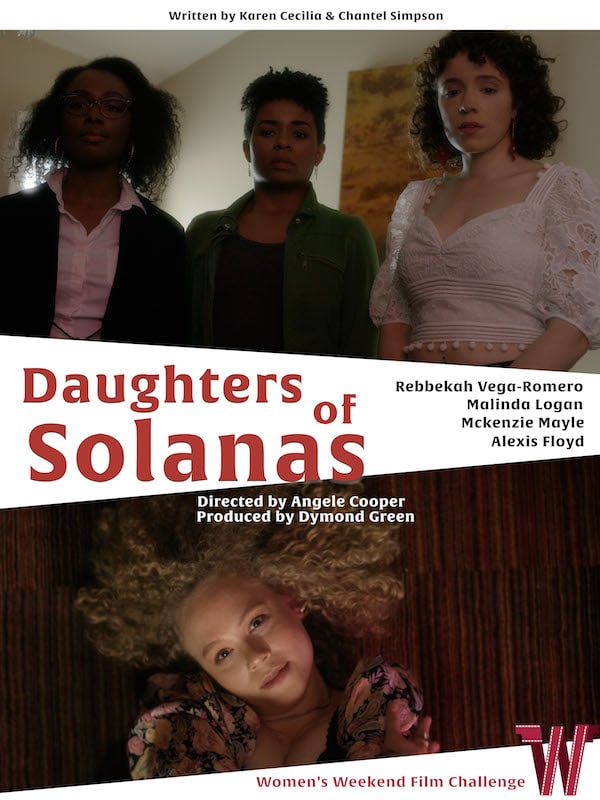 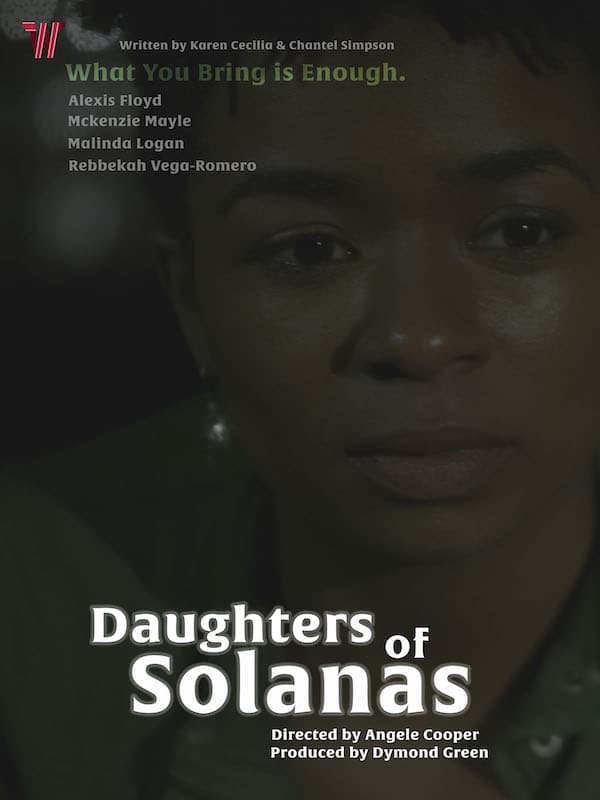 But we did! Shooting was wrapped around 10PM Saturday. Our team worked on cleaning up the mess that we made at our AD’s parents’ home, equipment was inventoried and everyone went home.

The next day the post-production team got to working. We had to get our marketing going, our Instagram page was set, all the knicks were being picked. I had to work on the poster. We were pushing it! Until finally 11:59PM came along and we had to submit our film.

That was the Women’s Weekend Film Challenge!  A group of women in film making a finished short in one weekend. It was concentrated experience, filled with energy, enthusiasm, nerves and drama. My favorite part is that I got to collaborate with so many wonderful women filmmakers, something new and refreshing.

The short we created, “Daughters of Solanas” will be screened, along with the shorts from the other teams on April 18th at the Museum of Moving Image in Queens, NY.

At American Movie Company we encourage and help facilitate the production of low budget short films like this one.  Women rule!

Check out our video production services.

Decades of professional experience, coupled with pride and care about our work, produces consistent high quality on a budget.