The Future of Our Business.

Virtual Reality – A New Frontier for the Film Industry

The American Movie Company has entered and is exploring this new frontier by focusing on two specific services: 360 Video Production & Augmented Reality. 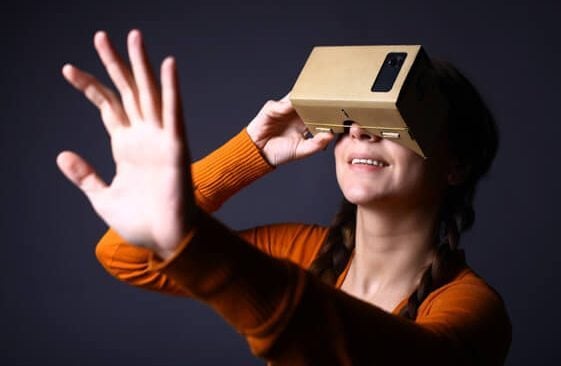 We have been watching 360 Video grow on many different social video platforms, the most significant being YouTube and Facebook. 360 degree video requires a special rig with several cameras. The footage from these cameras is stitched together in a way that creates a sphere of video. The viewer watches this 360 degree footage from the center of this sphere.

Using a virtual reality headset, such as an Oculus Rift or HTC Vive, or a smartphone with a high resolution display, such as an iPhone 6S plus or Galaxy S7, viewers can literally look around the footage. In other words, when watching a film in Virtual Reality, a viewer would literally turn his/her head to see what is on camera to their left, to their right, behind, or above their head.

When we think about Virtual Reality and 360 Degree Video in terms of video production, we see endless possibilities.

For example, an action sequence that follows a character through a war zone. Usually, viewers would be restricted to the camera’s narrow field of view. However, with 360 degree video, the viewer could experiencer the full scope of the battle, seeing explosions behind them as they looked over their shoulder. On a smaller scale, imagine a video tour of Paris. Instead of being limited to the camera’s view of the Eiffel Tower, viewers would be able to simply turn their heads to look at the smaller building which might not otherwise be visible on camera. We plan to utilize our presence in New York City to make the most of our 360 Degree Video production services.

The second way in which we intend to break into the growing market for Augmented Reality Storefronts will be by producing 3D content in line with the layout of the store to be viewed from the store window. For example, imagine walking past a closed clothing shop. As you look into the window, a tidal wave might crash in from the ceiling throwing bathing suits all over the place. We would accomplish this visual feet by constructing a 3D sequence with the wave and swim suits; we project this sequence in Augmented Reality on the store’s windows, blending the models with the actual store interior. We feel that storefront displays such as this will be so dramatic and visually stunning as to captivate anyone, potential customer or ordinary passersby.  Look out for such displays of Augmented Reality on 5th Avenue!