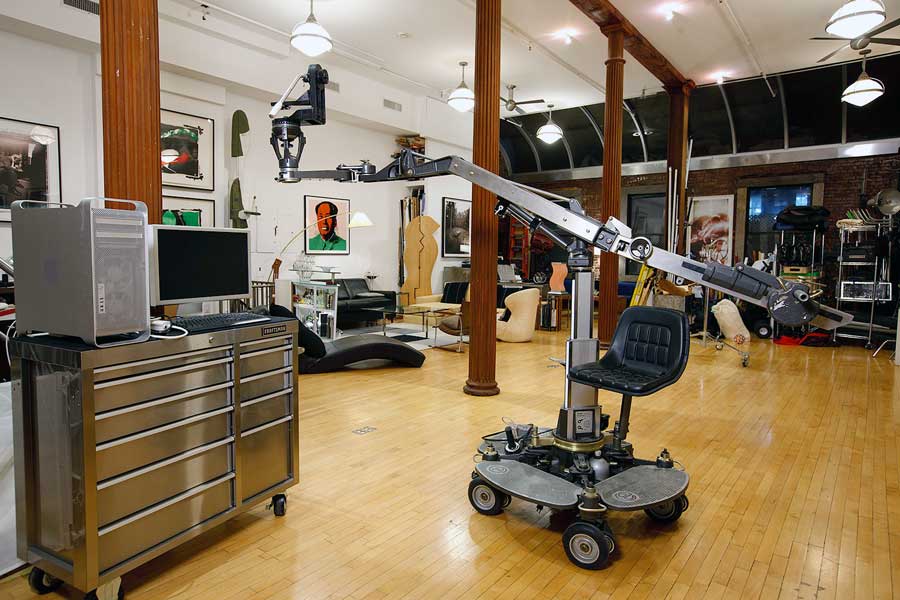 The Elemack Dolly “lives” on our NYC Green Screen Stage and is available for $450 a day. But we can take it on location.

The hydraulic jib is battery powered and can be set to move in exact increments. It can, for example, move extremely slowly so you could track across a product on a table top. Or, it can move rapidly and smoothly over a singer, dancer in a music video. Curved track is available at no additional cost. Ronford head comes with the Elemac Dolly at no additional cost.

The entire “Pure Love” music video below was shot on our Tribeca Sound Stage using our 25′ X 25′ white muslin backdrop and the Elemack Dolly & Jib.

In 1962 an Italian engineer, Sante Zelli, left his native city of Rome on a sales trip to promote a revolutionary new type of hydraulically-operated, single-column dolly he had recently invented.

There had never been anything like the Elemack Dolly before – meaning that he not only had to overcome the film technicians’ natural reluctance to use strange equipment on important assignments, but also something innovative from a far distant land. By 1979, Zelli had manufactured and sold more than 2,500 Elemack “Spyder” dollies to more than 60 countries all over the world – by any standards, a notable achievement.

There were a number of aspects of the Elemack Spyder Dolly (or Octopus as it is known in Britain) which made it unique from the very beginning. Its single column with an integral foot-operated hydraulic pump, adjustable wheels (its configuration may be easily changed from compact to widespread or to an extremely narrow gauge).

The possibility of the steering being changed from four-wheel crab to two-wheel steer, and the availability of alternative wheels, one type which will run on a smooth floor and another which will run on tubular track that can easily be laid on rough and undulating surfaces. Sections of tubular track which may be laid in a manner similar to sections of toy railway tracks and contributed to this form of dolly becoming a “system”.

Over the years the versatility of the Spyder has been increased by the introduction of the Mini and Jonathan crane arms (which gave the possibility of greater reach, height and overhang, of moving the camera up, down and slowing it around in-shot), the Snake arm which makes possible ultra-low camera positioning, the combined surface and track wheels which makes it possible to operate the dolly alternatively on a flat surface or on straight track without the time-wasting operation of changing the wheels, and so on.

Now, with the introduction of the new Cricket dolly, Sante Zelli has retained the original concept of a single column on a multi-configuration wheelsystem, but has made it a column which may be raised or lowered in-shot with extreme smoothness.

The principal difference between the Spyder dolly and the Cricket dolly is that the old pedal-operated, triple-hydraulic columns have been replaced by a new double extension elevating system operated by an Electro-hidro-Drive unit. The two extensions operate simultaneously being positively linked together by a chain system.

The two extension tubes of the Cricket dolly are made of triangular-shaped aluminium alloy extrusion which run smoothly together on roller bearings on hardened ground steel guides. This system assures rigidity between the columns without the need for clamps on the top of each section.

The Electric-Hydraulic Drive unit incorporates a 115V AC/DC motorised pump, a manual back-up pump, two hydraulic accumulators and all the necessary hydraulic controls to give an exceptionally wide range of variable speeds in either direction with an automatic soft stop at either end of the area to travel.