Back To The Future Flying Hoverboard

SIX ENGINES, A LOGIC BOARD, AND A BACKPACK FULL OF KEROSENE

The  FlyBoard Air Flying Skateboard images look real, like something out of “Back To The Future”.

But are they just elaborate special effects?

The author of the article below argues that the device is very real. 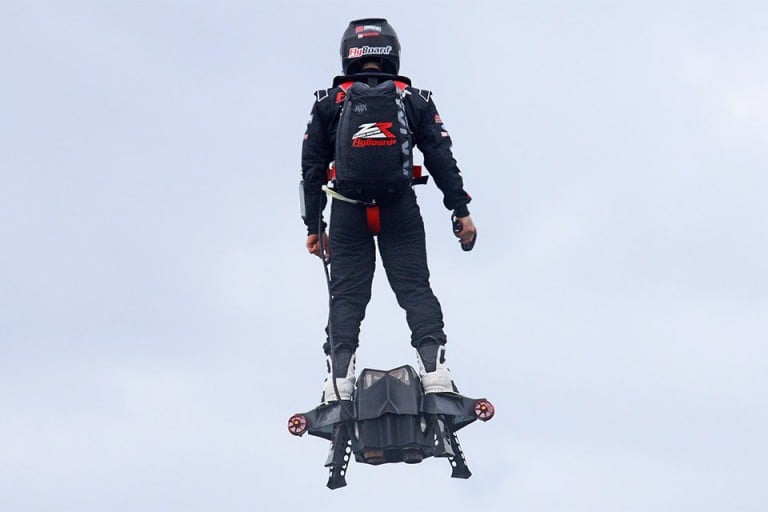 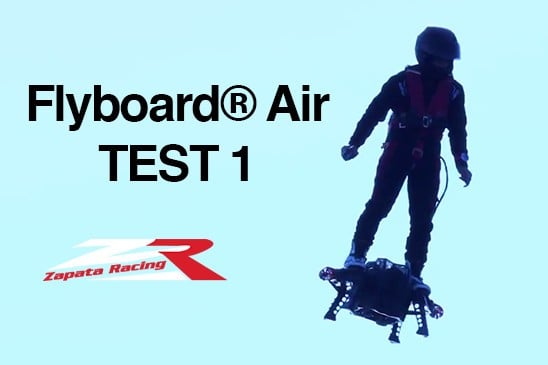 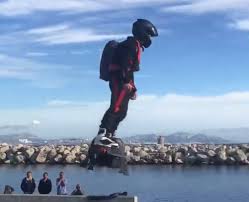 The video looks great but we are still very skeptical.

The following is a transcript from the “Verge”.

One of the most talked about things this week was a strange video of a man who appeared to have a real life jet-powered hoverboard. The video was published by Zapata Racing, which has made water-powered versions of these flying machines for a few years now. The difference is that those are always tethered to some kind of personal watercraft.

This new “Flyboard Air,” as CEO Franky Zapata calls it, is something totally different.

The video went viral on Monday, and it polarized the internet. People thought it was either the coolest thing ever invented, or that it was a massive hoax.

Even optimistic parties, like myself, were skeptical. Maybe we all still feel a little burned by Tony Hawk and Funny or Die, or maybe we were just being careful — after all, the video was suspiciously edited, there were very few details, and it just looked a little fake.

Over the week, more videos of the flight(s) surfaced, and it appeared to be the real deal.

This morning, though, Franky Zapata himself called me up to talk a little bit more about the Flyboard Air, how it works, and what he wants to do with it.

Let’s just cut open this rock and oh my gosh there is blood inside.

Yes, the jet-powered hoverboard is real, and yes, the creator has crashed it
Jet fuel can melt steely skepticism.

Sean O’Kane: So there are three parts to this, right? The board, a fuel tank, and a remote?

Franky Zapata: Yes, the thing I have on my back is like a Camelbak but it’s full of kerosene. Jet A1.

What kind of controls are on the remote?

That’s just throttle for the four turbo engines on the board. Two more are on the sides for stabilization.

When did this project even begin?

We’ve been working on it for four years. We tried to figure it out that by using the original Flyboard and just pushing air inside the hose. After that, we took two years to create the great turbo reactors, and to create the algorithms to stabilize the Flyboard.

When did you make the first flight?

The first working flight? It was just a month ago. And then when we were about to fly again we did a video, and we put that on YouTube. So it’s really new. It’s extremely new.

Can you tell me more about how it works? How many engines are in there?

We have four engines inside, and the power is 250 horsepower each. It’s about 1,000 horsepower total.

How do you keep it stabilized? Is there something helping you other than you just shifting your weight?

It’s a logic system inside the board that helps stabilize the machine. It’s extremely hard to stabilize, so yes it’s not only my balance. For example, we use like the same kind of electronics like you use on a drone to stabilize. The problem is to create the algorithms, the right algorithms, to combine the intelligence in the board and in your brain. So, we spent about four months to make that work.

What are those algorithms controlling to help stabilize, is it just thrust level?

No. We adjust the top speed of the small turbines on the side, and also the inclination of the turbo reactors itself. So it’s like we have six systems working together plus my brain and my legs.

So, it will actually change the angle of those turbines?

Would anybody be able to ride this without any Flyboard Air experience?

Oh, no. It’s impossible to ride it before you have a minimum of 50 or 100 hours in the original Flyboard with water. Also, if you want to try it, you must have seven lives, like the cat. [Laughs]

Did you test it over water as a safety precaution?

Yeah, we used water for the safety. Honestly, the whole system should be able to land if you have one turbo reactor fail. So, I’m able to stabilize it even if I lost one engine and we had enough thrust to get down and land. If one turbo reactor fails it’s fine, because we have four turbo reactors, and we can fly with three. And inside the remote we have three different Wi-Fi channels, plus we have three sensors. Everything is threefold, and they speak together, so in case one fails, the two also know which one failed, you know? So that’s the reason why we decided to fly for a few months over the water, but we are almost ready to fly above the ground in the next few months.

What happens if you do wind up in the water?

Nothing really serious, there’s no danger for me, because I fell in the water honestly three days ago. [Laughs] Three days ago I crashed in the water because we tried to — you know we’re going to do the hoverboard farthest trip. The last one was 275 meters, and we will break it by 10 times longer. We will do about 2 miles. We will cross 2 miles with the Flyboard Air at about 60 to 80 kilometers per hour. And we were training for that, and the last time trained we trained with 80 kilometer per hour wind. And we didn’t realize that when we have wind we go through more battery for the stabilization system. So just five seconds before I landed on the platform, I go out of battery. And the machine starts to turn like a torpedo, like if you lost the small rotor on a helicopter. I started to turn like [Franky makes a noise, “Shooooh!”], and I had no choice but to kill the engine just before I landed in the water. I broke all the electronics on the board, so it will cost me money, but the rest of it is fine.

Is this the only version right now?

We have just the one machine, because it’s just been working for four weeks. So now we are prepared to build another one, just for the media attention, because honestly we didn’t know that the media would be so excited about the project. At the beginning we just did it just to show people what we can do, and just to show our patience and what we achieved. But we didn’t realize that everyone wants to see the Flyboard Air for real, so now it’s not just something for us.

At the same time, we’ve finished the research and development on a new project that will use the same kind of board and the same kind of technology for the stabilization, but it will be much easier for the general public, and also certainly for the army, or for security, so we have something for this. We can use the technology to maybe change the way that people travel, hopefully.

THE NEXT VERSION  “WILL BE SOMETHING THAT EVERYBODY CAN RIDE”

What would be the biggest differences between this version and that one?

It would be something you can sit on it, something easier, I cannot talk to much about it because patents were not filed yet, but it will be something that everybody can ride. At the moment the Flyboard Air is something like, if you want to ride it, you have to spend 100 hours on a water Flyboard, plus you have to learn how to use it for another 20 hours, and you can still make a mistake and fall. So the goal for the other one is to have something extremely small, extremely stable, and something that you can take to go and buy your bread in the morning.

So what’s the plan for the this current version then?

I was skeptical when I first saw it because of the way the video was edited, and because it’s just a very unbelievable thing to look at. What was your reaction to the people calling “fake”?

I said that we achieved our goal. [Laughs] Because it’s exactly what we tried to do. We covered every mechanical aspect. The plan when we decided to create the Flyboard Air, it was crazy hard because we wanted to make something extremely small, something that looks like a skateboard and not like a helicopter. It would be easy to build something that was like 2 meters and able to fly, it would be easy to do that. But our goal was to make something so small that people would believe it’s a fake, or it’s just an animation. And so when people said that, honestly, we are happy about that. We achieved our goal. Because when people see it in person, they will go crazy. That’s cool.

“MY GOAL IS TO RIDE IN THE CLOUDS.”

Zapata Racing is already teasing more footage is coming, what will you be releasing?

We plan to release footage about every month. Then in 16 days we will break the world record when we cross three miles on the French coast from one city to another city, and we will land in the middle of the city in front of the public. And after that, we have crazy things. You won’t believe it. [Laughs] We will fly the clouds. My goal is to ride the clouds. Do like snowboarding in the powder, but I want to do it in a cloud. That’s my dream, and I will do my best to realize that.

Is there a safety system for these crazier flights, like a parachute or something?

Yeah, before going high in the sky we will use a parachute. But over the water, I have already fallen many times at over 85, 90 kilometers per hour when doing my testing. So I know you can fall at about that speed without too much injury. The machine is capable of going 90 to 100 miles per hour, but in my tests with my ability I didn’t pass over 55 miles per hour. That’s the maximum speed I reached three days ago. I think before the end of the summer I will be able to reach 80 miles per hour.

This interview has been lightly edited for clarity.

Yes, it’s real!
I know Frankie, the inventor, and his team. He started off with the flyboards which are powered by the thrust from Jetskis. I didn’t think he would pull this off so quickly, but he did!
Curious to see how it will be utilized in the future
Best
– Paul Kabata

And check out more cool tech!

Expanded Reality:  The Next Big Thing

You be the judge…

“Back To The Future” Flying Skateboard