We’ve worked with the production team in the past, but at 6:30 is the morning I had the chance to join the team on set for the first time.  And for all the our single lady and gay male blog buddies- let me tell you- College Humor’s team has the market cornered on production crew hotties! So many good looking men this morning…and all with pleasant dispositions before sunrise! I wish I could have gotten more photos for my little black book, but in the interest of professionalism I had to restrain myself (sigh).  Thankfully the studio was FREEZING cold this  morning so I was standing in the proverbial cold shower ; )

Alright enough on my man hunting, back to what you came here for- the dish on the College Humor shoot.

College Humor partnered with us at AMC for their latest  video sketch  “yes or no”. Celebrity host Regis Philbin joined the cast to parody his role in the popular game show WHO WANTS TO BE A MILLIONAIRE.

College Humor’s casting team had Regis for about an hour this afternoon so we took most of the morning setting up and rehearsing to avoid running out of time with the busy celebrity.

We shot using three Canon 7D cameras and a RED Cam. Lots of coverage was called for given the limited time College Humor and the gang had with Regis.

And the buzz on the set, blog buddies, is that in 2012 College Humor is looking to evolve from its current business model. Decision makers on set spoke about their plans to seek annual contracts with celebrity talent and setting up a year worth of productions that feature the contracted celeb.  In addition, there is talk of breaking the production aspects of College Humor content creation apart from the herd and creating a College Humor production division within the company.

Sounds like a smart move, especially if they’re planning on contracting bigger name talent for sketches all year long.  Some of the team mused at the big plans for 2012 might be too ambitious given the size and scope of the company right now, but either way as a young Producer it’s very exciting to see new media continuing to flourish.

Why? Well, because new media is a great way to create your content and have it seen by the world! Before new media was a trend, the only outlet unestablished but talented writers, directos, cinematographers and producers had to showcase their creations was film festivals.  Now we have a captive audience available 24/7 with whom to share our ideas and creations. Thanks to sites like College Humor – where users can post content in addition to their own “in house” productions – content creators have an online venue that recieved over 2 million views a month.

As always, I’ll keep grabbing behind the scenes snap shots to share with you. Check them out below and definitely look out for the sketch “yes or no” on www.collegehumor.com 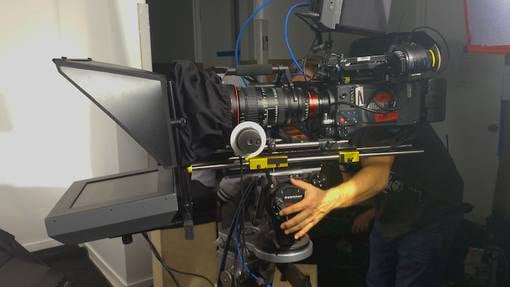