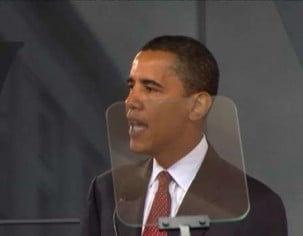 President Obama using a presidential teleprompter during a speech.

A teleprompter is a piece of technology that performers use to remember their lines.

Well, first you may ask, what is a teleprompter?   It’s is a piece of technology that performers use to remember their lines.  It is a monitor that faces a reflecting piece of glass.  The monitor projects the performers’ lines flipped and it is flipped again so that it is readable when reflected on the teleprompter glass.  Talent can then see exactly what they’re going to say.  This takes a lot of stress off of them because they know they have something to fall back on.

However, the talent definitely has to at least know a little of their speech/lines/whatever else because if they don’t, they are putting all of their eggs in one basket.  If that basket breaks, they have little hope.

The President of the United States uses one for virtually for every speech that he gives.  He uses a presidential teleprompter, which has two screens, one on the right and one on the left.

“When you watch the news, do you ever wonder how the anchors seem to know their lines so well?”

When you watch the news, do you ever wonder how the anchors seem to know their lines so well?  Well, that’s not because they’re some superhuman who can quickly memorize the news every night, but because they have a standard prompter to assist them.  Some news anchors are so reliant on the prompter that they will read absolutely anything off of it no matter how ridiculous, as spoofed in Anchorman.  What looked so ridiculous in Anchorman happened in real life a few weeks ago.  When the Asiana airplane crashed in San Francisco a few weeks ago, a news reporter at KTVU had the job of reporting this story.  Unfortunately for her, someone played a cruel trick on her.  When the anchor thought she was reading the crew’s real names off of the prompter, she wasn’t.  Some names she reported were Captain Sum Ting Wong and other false pilot names.  But, because the anchor relied so heavily on her prompter, she didn’t catch the joke and made a complete fool out of herself. 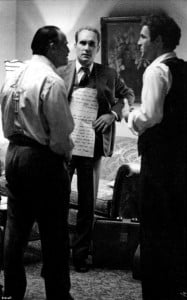 Marlon Brando reading his lines for The Godfather.

And what about the movies or TV?  Actors on stage always need to memorize their lines, but film and television drama actors don’t since they’re usually not in front of a live audience.  For his Best Actor Oscar-winning turn in The Godfather, screen legend Marlon Brando used a version of a teleprompter.  Brando’s lines would be written out and taped on actor’s shirts because Brando never memorized his lines.  Nowadays, an actor would simply have some form of a teleprompter on hand.

“Teleprompter rentals are one of the American Movie Company’s specialties.”

Teleprompter rentals are one of the American Movie Company’s specialties.   We have presidential Units, standard prompters (prosumer model), Interrotrons, EyeDirects, and confidence monitors.