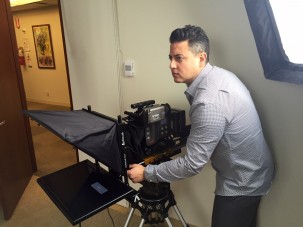 In the past few years I’ve worked closely with high profile A-list celebrities, CEOs and CFOs of the top Fortune 500 companies. I’ve worked in several capacities on live award shows, national commercials, and on international WebCasting jobs. All experiences, positive, gripping, fascinating, as they were, pale in comparison to my last job – teleprompting for President Bill Clinton! Words fail me. I will say simply that it was an honor and a privilege to meet him. This day will be eternally etched in my mind. The magnitude of being in the presence of a former President of the United States, once one of the most powerful men in the world is infinite. The fact that President Clinton happens to be a man I admire, well… I am and was in awe of his stature and the altruistic work he continues to do here and around the world under the aegis of the Clinton Foundation.

Now, allow me to tell you about the actual job. The film production took place at the Clinton Foundation here in New York City, at 1271 Avenue of the Americas.

I was the Teleprompter Operator for President Bill Clinton. 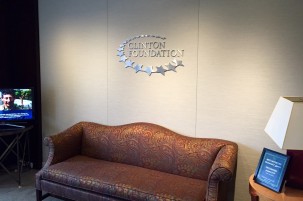 Waiting Room at the Clinton Foundation

The logistics were, by nature, complicated. Prior to actually being allowed on set, the Secret Service did a full background check on me and required I present my passport.

Upon arriving at the loading dock, I was welcomed by a sniffing Black Labrador Retriever and several agents.

The Pelican case with all my gear was opened and inspected thoroughly by armed guards. I too was patted-down by serious, no-nonsense agents. It was all a bit intimidating but also extremely cool and clearly necessary.

For such an important job as this we at Teleprompter Rental and the American Movie Company provided our signature 12” standard teleprompter, autocue mounting bracket, gold plate sliding system with additional 15 mm extension rods and our QTV ultra bright monitor.

We shot the series of speeches to camera with an Arri Amira camera, with an O’Connor fluid head tripod system and a 1 Century 17-35 mm T3 PL Zoom lens.

We conducted a rigorous run-through to ensure all would go well.

The President arrived on schedule for our 1 PM shoot escorted by six Secret Service men. Two were in front of him, one on each side and two in back of him. They led him to the office where we were filming.

The set, as it were, was Chelsea Clinton’s personal office. I sat at her desk and the affable, unflappable, self-assured President Clinton was positioned in front of me, looking directly at the camera. It was phenomenal. I was living a dream.

President Clinton radiates confidence and has that rare gift of making everyone in his presence feel important. He connects with each person on a visceral level. Before sitting down he shook hands with everyone. A true gentleman! His private secretary introduced us. She and I had worked closely earlier in the day going over the script until it met her approval.

President Clinton and I shook hands and went to work immediately. I gave him a brief overview of the actual script and the process. He grasped it in a second and complimented me both on the format and the Teleprompter series I was using. As for the content, I am sworn to secrecy.

Everything went so well that I didn’t think things could get any better. They did! After the shoot, President Clinton took the time to compliment me. I don’t know if he is given to hyperbole, but he said that I was the best teleprompter operator he has ever worked with and asked his secretary to be sure to get my contact info. I am still walking on air with a permanent smile on my face!

Between takes, President Clinton and I and some of the crew exchanged pleasantries. He commented that he’d recently had Lasik surgery. The teleprompter settings I had set were very much to his liking. Dependence on glasses no longer a necessity. He added that in Europe Lasik surgery is approved for both near and far sight vision. It is not yet approved in the United States. If it were he too would have had that surgery.

At the onset, a Secret Service agent asked that we keep conversation with the President to a minimum. I honored the polite request, but am happy to say that Bill (with all due respect) and I hit it off! Under different circumstances, I can imagine endless conversations on a multitude of topics.

In fact, I think the small talk was conducive to making him feel at ease and relaxed. He delivered the speech with aplomb. Let us not forget that we are dealing here with one of the best communicators in the world.

This job stands alone. It is not every day that one has the opportunity to direct and teleprompt for a former President. It is made even more special when one considers that this individual is one I personally admire. He can be credited with “building a bridge to the 21st century”. He has devoted himself to doing humanitarian work on a global scale. He remains my favorite public speakers.

Indulge me as I reiterate that this was, indeed, a moment in time I will never forget. To paraphrase from one of my favorite films – this is, uh, the stuff that dreams are made of.

We are truly, now more than ever, the “American” Movie Company.

It is always an adventure when working for the American Movie Company.

I look forward to my next gig and can’t wait to share it with you.