The American Movie Company Teleprompting at the United Nations 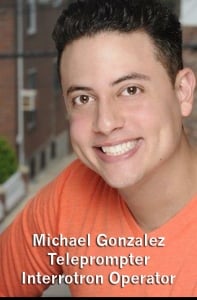 This past week I had the enviable pleasure of Teleprompting at the United Nations. The occasion was the reinstallation event commemorating the double mural Guerra e Paz, ‘War and Peace’, by one of Brazil’s most beloved artists, Cândido Portinari. They were commissioned by the Brazilian government as a gift to the United Nations decades earlier. 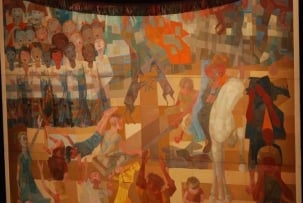 Portinari mural at the UN

Portinari began work on these imposing panels in 1952.   Individually they measure 46×32 ft.  Sadly, because of his unapologetic connection with the Communist Party, he was not allowed at their unveiling in 1957.  He was not given a visa. Politics!

João Cândido Portinari is the son who has been entrusted to honor his father at this particular event.  He is also the General Director of Projeto Portinari which coordinated the War and Peace Project (Projeto Guerra e Paz).

I worked very closely with him prior to his sharing his father’s story with the assembled guests at the UN.

He told us about his father’s humble beginnings, born in 1903 of Italian immigrants in Brodowski, a small town in the state of Sâo Paulo. He had no formal education. Apparently, he became interested in art, while at age 8, helping a house painter. He became tenacious and single minded. He moved to Rio de Janeiro at 15 and became an artist himself.

Portinari passed away much too young at 56 years old. He left a legacy of over 5,000 murals, paintings, drawings and prints. He is one of Brazil’s most famous and acclaimed artists. His ouevre comprises a synthesis of all the aspects of Brazilian life and culture during that era and what he construed as a statement against war.

The murals donated to the United Nations were the greatest work of his life and were called the War and Peace Panels, hence the name of the show.

The client who hired us is the Vice President of ADV Productions, an audiovisual company contracted by the UN.

He ordered the Presidential Teleprompter, which I set up at the left and right hand sections of the main podium in the General Assembly room at the UN. 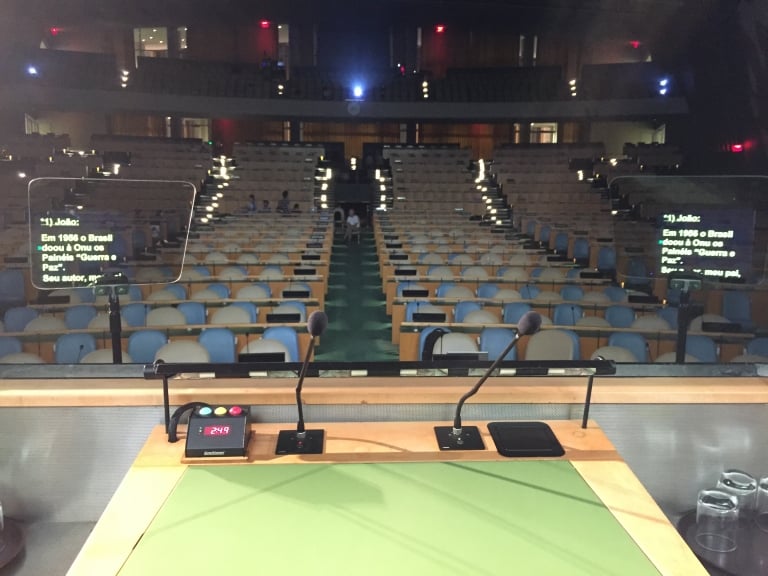 Presidential Teleprompting at the United Nations – in Portuguese!

My Pelican cases were methodically and meticulously prepped with backup glass panels, additional cabling and backup converters.  I also brought with me and kept in the van for any emergency, the regular Teleprompter, and the Confidence Monitor.

At The American Movie Company and Teleprompter Rental we pride ourselves on being over-prepared for a given job.

I also supplied a very important backup converter called CAT5, which enabled me to run 100 feet of cabling from the main stage area to another CAT5 converter which led to another 100 feet of VGA cabling that got me to the fourth floor balcony of the General Assembly room. This is where the entire crew was assembled, so as to leave the main floor area for the special guests that evening.

I am glad I also supplied 2 entire rolls of professional non-slip black gaffer’s tape. I used it all. By the way, the tape ran through a very specific pathway, which had to be approved by the UN guards. They take security seriously!

After two days of intense rehearsals, I prepped and practiced all the particulars required of me. I was more than ready for it! I was also excited about being part of this very important event.

The show went live on the UN Channel for the globe to see.

I was the Teleprompter Operator for several notables:

First, for the Secretary-General of the UN, Mr. Ban Ki-moon.

Then the Ambassador of Brazil, Mr. Antonio de Aguiar Patriota, Ms. Bia Lessa the creative director of the event, and finally for Professor João Cândido Portinari, the son of the honored artist, Cândido Portinari.

This was a night to remember and pay homage to this most special man.

I teleprompted in Portuguese, as most speeches were given in this beautiful, mellifluous language. I learned quite a bit about the cadence of Portuguese versus Spanish. When spoken they differ a lot. Dare I say it?  I love the SOB! (Sounds of Brazil)!

The event was a lot of hard work and involved tons of preparation at the United Nations. It more than paid off on all levels.

The opening night at which the mural exhibition was unveiled and the actual presentation were a success and the show remains a powerful and memorable experience for everyone.

Thanks for reading.  See you on the next blog!

The American Movie Company Teleprompting at the United Nations