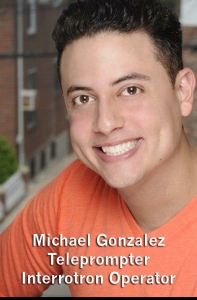 This past weekend I had the distinct honor and privilege to work on a shoot for Nickelodeon and Nascar. Nickelodeon, the clear leader in entertainment for kids, and NASCAR, which needs no introduction, teamed up to take young viewers into the world of car racing.

Karsyn Elledge is the granddaughter of Nascar racing legend Dale Earnhardt and the niece of Dale Earnhardt Jr. What family lineage! She is expected to follow in the family business. Karsyn, at 16, is the appealing, effervescent host of a new Nickelodeon show called, “Hammer Down”.

Given her age and inexperience on set, she needed a teleprompter specialist to effectively train her on camera. It was a fortuitous encounter. This was the perfect job for me. I am, with all humility, a teleprompter maven, and a Screen Actors’ Guild union member. I am an actor with years of extensive experience on various television shows and intensive camera acting study.

I traveled 120 miles from our American Movie Studios in Tribeca, NYC, to the Poconos, Pennsylvania. We were shooting at the famous Pocono Raceway, also known as the Tricky Triangle, where racing greats 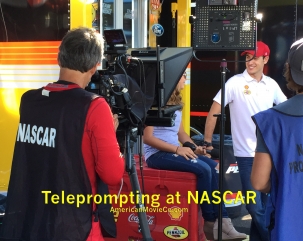 like Jeff Gordon, Kyle Busch and Dale Earnhardt Jr. have made IndyCar history!

I’ve been a race car fan my whole life, although I never really followed it on a regular basis. I found the repetitive 200 laps to be rather boring. I was eager to see what it would be like in person. I wanted to see if there really was a major difference.

Upon my arrival, we started with the introduction promo lines for Nickelodeon. We were at the NASCAR American Ethanol and Coca-Cola garages where all the super cars were getting the engines fine-tuned, in essence, the finishing touch!

The intense roar of the most powerful engines imaginable, made the hair on the back of my neck stand 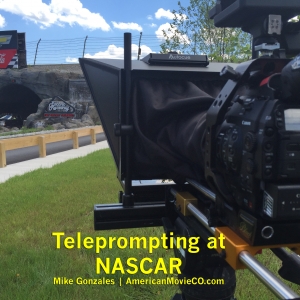 up.   An unexplained, strong emotion overtook me and I felt connected to the horsepower gods around me. It was intense!

As we finished the promotional video portion of filming for Nickelodeon, the preliminary races began and I got to watch some of the fastest cars on planet Earth do their thing. It was breathtaking and something I will never forget.

This particular job was not all fun. There was a lot of technical work. Luckily, I had prepped and it really paid off.

We take our jobs at American Movie Company and TeleprompterRental.com very seriously. When working with clients as huge as NASCAR, there is no room for anything but perfection.

We prep with back ups for everything technical and make sure we have stand-by units ready to go if any failures ever occur.

The clients ordered a standard 12 inch AutoCue Teleprompter with an ultra-bright monitor and external battery power for all day exterior shoots around the Speedway.

This also meant I needed my laptop to run for many hours without access to any electrical outlets.

After trips to BestBuy, B&H and TekServe, we decided the most cost-efficient thing to do would be to purchase two additional battery packs for my Mac. This gave me a total of 3 ½ hours of battery time with 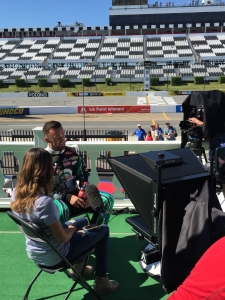 my old Mac battery and the two new ones.

The clients also needed the teleprompter unit to be as mobile as possible. I took another trip to our American Movie Studios and took out our 500 series Heavy Duty Manfrotto Tripod and our foldable Manfrotto wheel system that would allow for a camera and teleprompter rig to be completely stable and mobile on wheels.

It was a beautiful setup and rig. I was proud to build and use it on the track of NASCAR with the some of the fastest and most proficient cameramen in the business of live filming.

The NASCAR crew was great and made me feel so welcome. Building the teleprompter unit daily and working with Tom Greco, cameraman for 15 years for Nickelodeon and Nascar was a pleasure.

Karsyn Elledge was a sweetheart to work with.   She was receptive to my suggestions and we trained with purpose. The result was that she effectively read off a teleprompter with ease and self-assurance.

Please enjoy the on-set pictures of the interviews conducted by Karsyn around the Tricky Triangle Raceway.   Take a look at the specialized teleprompter and camera rig. Also of interest may be the Nascar Garage and some action shots of our fantastic film crew.

Thanks for reading and see you on the next blog!