Teleprompting for Salma Hayek re the Global Citizen Festival.

This past week I had the unique pleasure of working as the Camera Teleprompter Operator for the Global Poverty Project, with the singularly beautiful, Salma Hayek Pinault.

This non-profit organization is currently working on an initiative to recruit tens of millions of people to learn about global issues, and to take action in support of the organizations campaigning to tackle them. What better way to take effective action on one of the most important issues this world is facing than to have film actress, director and producer super-star Salma Hayek be part of the force behind the issue of extreme poverty.

The day began at a highly secured, lavish suite at the prestigious Ritz Carlton Hotel in New York, located at 50 Central Park South.

After checking in and getting our official crew passes, we entered through the service entrance and began dressing the room for the shoot. We only had one hour to set up before Salma Hayek and the head representatives of the Global Citizen Project and its legal team, were ready to begin.

We used our 12 inch standard professional Autocue Teleprompter with collapsible hood. We mounted it together with the Red Epic camera and Optimo prime lens. It fit beautifully with the dovetail from the Red camera and our gold plate with 15mm rods. I also provided a Manfrotto 500 series heavy-duty tripod, two Autocue five pound counterbalance weights and a backup ultra bright monitor for safety. 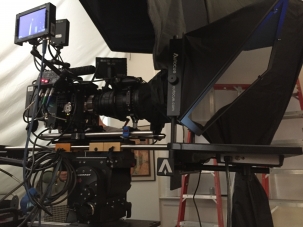 The script was sent to me in advance so I could properly format it for the Teleprompter software. I am happy to tell you that the director of photography complimented my preparation and was very impressed with our overall Teleprompter setup.

She told us she had been up and talking non-stop since 5AM and was eager to make her speech for the Global Poverty Project in the next 20 minutes.

The director introduced me to Salma and we made a few adjustments on the spelling of some words since English is not her first language.  Writing words out phonetically was a huge help and she sailed smoothly through the few scripts.

Salma spoke with enthusiasm about the 2015 Global Citizen Festival in New York City on September 26th, which she will co-host.

I will, without a doubt, be attending.

She spoke with equal elan about “Chime for Change”, the global campaign for girls’ and women’s rights that she co-founded with Beyoncé Knowles Carter and Gucci to amplify the voices of girls and women around the world.

To quote their own description and aim: “Chime for Change” is a community of people working to promote Education, Health and Justice for every girl, every woman, everywhere.

An impressive number of artists will be on hand: Pearl Jam, Beyoncé, Ed Sheeran and Coldplay.

Thousands of global citizens are expected to attend this unprecedented free ticketed event. Their presence will encourage our world leaders to commit to ending extreme poverty.

This month, (September) at the UN General Assembly, leaders from 193 countries are to meet and are expected to announce new global goals. The aim is to fight inequality, protect our planet, and to put an end to abject poverty by 2030.

I strongly suggest that anyone reading this blog go to GlobalCitizenFestival.com and take action.

I’ll see you in Central Park on September 26th !