Robot Actors Performing Stunts… over and over perfectly

Autonomous robots created by the Imagineers under the umbrella “Stuntronics”

Disneyland and other parks in the family, as it were, have an amazing history in terms of its “animatronic” characters.  The technically advanced versions are nothing but incredible and have been welcome attractions by the millions who visit.
These figures at first were hydraulic and pneumatic and have now developed into fully electronic characters.  Only imagination limits the interactive ways in which they interact on these rides and attractions.  A visitor feels emotions and realizes that these figures are imbued with life!
The Disney universe, (I almost said the Disney world) is home to an array of machines that are much more active and able to approximate the physicality and nature of said characters.
Recently an addition to this already impressive pantheon is expected to alter the way these characters move throughout the parks.  Without question it will change the way we think about robots and their posture.
In the old days, we all accepted that these figures have limitations. Movement as such was problematic.  They were built and had to adhere to very exact specifications.  They could not just go from a place to another easily. These days both the design and programming phases are closely related.  The most important and popular characters are the heroes – not only efficient but durable and able to run every day, several hundreds of times a day, for years to come!
Autonomous robots have been created by the Imagineers under the umbrella “Stuntronics”. They are truly amazing.  They’re capable of performing aerial stunts that are truly “death-defying”.  I am not given to hyperbole, believe me.
In the following video, you can be a witness!  The robots mimic a human’s movements in getting from A to B.  The twists and turns in mid-air add to the enjoyment.  One is mesmerized once again by Disney’s endeavors! 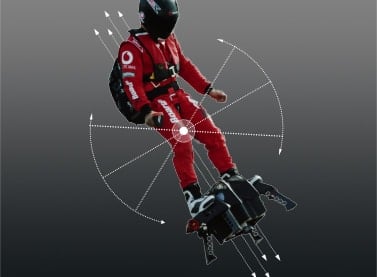