Under the aegis of the American Movie Company, I was the Presidential Teleprompter operator at an historic event – the commemoration of Martin Luther King, Jr. Day at the Riverside Church.

It was here that in April of 1967 he delivered one of his most remarkable, impassioned speeches, Beyond Vietnam: A Time to Break Silence.

And so it was that on January 18, 2016, the phenomenal Lin Manuel Miranda was one of many to give voice to those immortal words.

To say that I was honored to be at the Riverside Church on this day is an understatement. I met and worked with an outstanding group of men and women. Most were familiar with the Presidential Teleprompter, others needed an introduction and a little practice. All were receptive to my suggestions and eager to perform from the heart.

Ryan Coogler, director of Creed and founder of Black Out for Human Rights, organized a stirring lineup of African Americans from the entertainment field to recite incredibly powerful speeches from Civil Rights heroes, to pay homage to the Reverend Martin Luther King on his day. 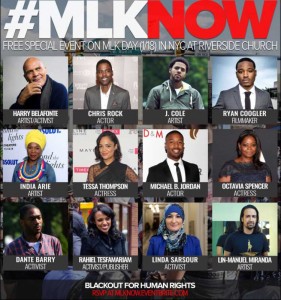 Among them: Lin Manuel Miranda, the creator and star of Hamilton, currently the most sought-after ticket on Broadway. Chris Rock needs no introduction. He is slated to host the Academy Awards in February. Anika Noni Rose is best known for her Tony Award-winning performance on Broadway in Caroline, or Change and her starring role in Dreamgirls. Michael B. Jordan has had countless roles on television. He is now enjoying the success of his starring role as Adonis Creed, son of fictional boxer, Apollo Creed in the Rocky sequel film Creed. Octavia Spenser, won us over and amused us in her role in the 2011 The Help for which she won the Bafta, Golden Globe, SAG, and an Academy Award for best supporting actress.

I must single out Harry Belafonte, a singer, an actor, and an activist. A legend! I have admired him and been impressed by his unflinching dedication to civil rights issues during his life. He met Martin Luther King, Jr. in the 1950’s. They became the best of friends and shared the same dreams. Mr. Belafonte was present when MLK gave the “I Have a Dream” speech in Washington, D.C. He visited Martin Luther King, Jr. days before he was assassinated in 1968. Lo these many years have not dampened his spirit and optimism.

Other speakers at the event were also worthy of mention: Condola Rashad, Adepero Oduye, Tessa Thompson and Andre Holland.

Allow me to end this reflective occasion by leaving you with these thoughts:

Even though we face the difficulties of today and tomorrow, I still have a dream.

I have a dream that one day this nation will rise up and live out the true meaning of its creed: “We hold these truths to be self-evident: that all men are created equal.”

I have a dream that my four little children will one day live in a nation where they will not be judged by the color of their skin but by the content of their character.

With this faith, we will be able to transform the jangling discords of our nation into a beautiful symphony of brotherhood.

Jon Meacham, one of my favorite historians, writes that, “With a single phrase, Martin Luther King Jr. joined Jefferson and Lincoln in the ranks of men who’ve shaped modern America”.

Am certain we would all agree with that sentiment.

Without question this particular job as a Presidential Teleprompter operator will live with me forever.  I was in the presence of giants (Harry Belafonte) in the civil rights movement and heard the most memorable words etched into the history of the United States.

Permit me to share with you a post from a very close and dear friend about my job as a Presidential Teleprompter operator.

We at the American Movie Company had the singular honor to be a miniscule part of what was an amazing celebration and remembrance of Martin Luther King’s life and accomplishments at the Riverside Church in upper Manhattan on January 18th, 2016.

One of our operators was the Presidential Teleprompter maven at the event. Several of us at the office were informed by Michael Gonzalez, the above referenced professional, in real time, when the LiveStreaming was to begin. We continued to work on our computers with the #MLKNOW event in the background.

Shortly thereafter, we were galvanized! Upon hearing the impassioned rendition by Lin Manuel Miranda of MLK’s “Beyond Vietnam: A Time to Break the Silence” and the equally stirring words of James Baldwin, “My Dungeon Shook “ spoken here with such aplomb by Chris Rock, tears began to flow. This was not a maudlin, mawkish reaction. This was a from the gut response to ideas that have not lost their relevance, but rather continue to challenge us. We stopped what we were doing and simply gave in. We listened and allowed those words to awash over us. I apologize if I seem to overstate. I assure you it is sincere.

There were other electrifying speeches reverently rendered by Harry Belafonte, Octavia Spencer, Michael B. Jordan and other luminaries.

This event will be remembered for depicting MLK’s brilliantly conceived ideas and the enduring power of his words.