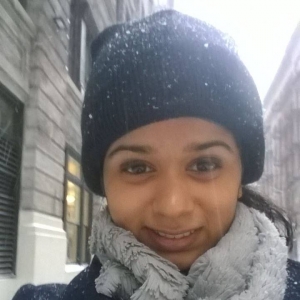 In early February, I received calls from Bill Milling (the CEO of the American Movie Company and Teleprompter Rental) and Arie Ohayon (our amazing DP) offering me the opportunity to co-produce a music video for a client. I was elated, and accepted the challenge.

I began working closely with Arie and his wife (and kick-ass producer), Michelle.  We drove into the heart of Queens to scout the medical facility where shooting would take place. There, we met the client, Alex, who had already been speaking with the owner of the business. After snapping a few pictures, we headed to a Panera Bread for a small production meeting. We discussed schedules, cast members, props and even debated whether we should have artificial guts made by the makeup artist, as we ate our warm soups and sandwiches. After the meeting, I went home.  I was excited to be in on the ground floor, as it were.  I mulled over the day’s events and drew up an organized document detailing all that happened and all that we discussed.  I am super organized and revel in details!

As the actual shoot day drew closer, Michelle and I spent more time communicating by phone and in person about what still had to be done.  I had spent most of the month running around buying wardrobe, props, food and other items necessary for the shoot.  It was fun to amass all the elements.  I must share with you my concern about how easy it was to acquire certain medical supplies such as patient gowns, scrubs, isolation gowns and hospital ID tags!   This worried me.  Shouldn’t one be required to present a license in order to purchase that kind of stuff? This is probably why a Florida teenager was able to impersonate a doctor and run his own clinic for at least three months before being arrested! Current events aside, I enjoyed my marathon shopping spree.

The shoot date finally arrived. I anticipate problems.  I’m told that this is an asset as a producer.  I loaded everything into my car the night before so that it would be easier to transfer the items into the van that was picking me up. Eduardo, one of our crew members, arrived and we drove to the location and quickly unloaded. Our schedule was tight, so my priority was to run the wardrobe over to the actors. Michael Gonzalez, who was the AD on this shoot, helped Eduardo put out the food for cast and crew. We work together like a fine tuned machine.  There are no egos involved.  We all do what has to be done for the good of the job.

Once everyone was settled, we spent time rehearsing the first scene.  It was set in the recovery room.  On the spur of the moment,  I found myself controlling the disco lighting that would turn a boring, miserable room full of “sick patients” into a fun and lively dance club! After filming for a few hours, we broke for a well deserved thirty minute lunch consisting of Chinese food, fries, onion rings, and pizza.   With renewed energy, the crew got back to work preparing for another shot.

Another of my responsibilities was to make sure that all actors signed the release forms that gave us permission to film them. We were soon ready to resume filming.  I went back to my post as the lighting gal for an hour or so, until we were ready to film the club scenes.  Again, needs arise and so when it was safe for me to abandon my recently acquired post, I filled in elsewhere!  I ended up showering the cast with confetti by popping party poppers (say that three times fast) off-screen with our intern, Jae.

After we finished shooting the last scenes in the recovery room turned dance club, we moved equipment to the corridor to film the chorus scenes. This particular scene involved bringing a live chicken on set!  Yes, a real, living, breathing, chicken – with a very large pair of feet!  The chicken was calm and cool.  She acted like the professional she is!  My concerns about the health issues involving livestock in a medical facility were abated at finding out that care was taken.  Thankfully, the chicken was kept away from the operating rooms and sanitary equipment.   Professional cleaners had been hired to sanitize the location after our departure. 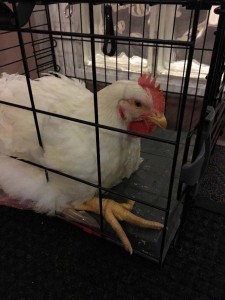 Several actors left after filming the chorus scenes.  The beloved chicken was taken away, and the group whittled down to about 12 people. We had a few scenes left to shoot. Our next scene  was set in an operating room. While Arie and Lou (the gaffer) were shooting the scene, I ran around the entire facility gathering items and preparing to wrap. I also did a much needed coffee run for a double shot cappuccino from Dunkin’ Donuts.
Once the shooting in the operating room was over, there was one last scene to shoot in the facility’s elevator.  This only involved three people, the actor, the client and Arie.  Lou and I decided to load the vans and finish preparation for our departure. Once the vans were loaded, we found out that Arie still had more work to do.  Luckily for our tired bones, none would require our presence.  After bidding him adieu, I went home exhausted but invigorated.  I looked forward to a warm shower and to fall into a well deserved deep sleep after such a demanding day.  I felt good about myself and my ability to go with the flow.  I enjoyed all aspects of this production.   I ventured again into the exciting world of producing!