Joss Whedon’s MUCH ADO ABOUT NOTHING Movie Review

Shakespeare’s works are extremely tricky to adapt.  Creating a successful film adaptation requires a great cast, a sharp editor, and most importantly, a director who can keep control over the film, yet give his/her actors enough room to explore.  Joss Whedon, best known as the writer/director of Marvel’s The Avengers and the TV series Firefly, took the risk of filming Shakespeare’s delightful play Much Ado About Nothing.  He filmed it in 12 days at his house.  He chose to film it in black and white and worked within the constraints of  an extremely low budget.  He set it in modern day, yet adhered to the original text (i.e. the dialogue was not updated).  What could have ended up as one of the worst Shakespeare adaptations, ended up being one of the best, if not the best that I have ever seen.

It is amazing to note that Whedon’s Much Ado About Nothing was shot just one month after The Avengers wrapped.   It is like watching a group of friends perform Shakespeare together, which is precisely what this play calls for.  Much Ado About Nothing is a timeless work that rides on its sense of love and friendship and its sense of joy.  By stripping away any fancy costumes or artistic embellishments, Whedon and cast created a film that captures the essence of the play, while still leaving their own distinct mark on it.  The modern setting and laid back attitude allow the actors to truly live inside of the world created.  At one point, to provide some pleasant background music, one of the characters puts on an iPod.  It is little details like this that remind us that we are not in a foreign world or a time gone by, but rather our own.  Most modern-day Shakespeare adaptations seem to want us to feel like we are in a time past and want us to revel in the beautiful settings and costumes, not necessarily the language.  But, Whedon doesn’t want that because he wants Shakespeare to feel alive again, to feel relevant.  Whedon allows his actors to speak, not perform, their lines.  When one performs lines, they tend to overact and a wall of artifice is built up.  However, when one speaks their lines, the artifice falls away and that allows the actors to feel the lines and reach deeper realms of emotional honesty.

The cast of Much Ado About Nothing is very much one of the reasons why it succeeds.  While everyone shines in their respective roles, it is Amy Acker, Alexis Denisof, and Clark Gregg that are the highlights.  These three have impeccable comedic timing and are pleasures to watch when onscreen.  Gregg, known for his role as Agent Coulson in The Avengers and Iron Man, plays Leonato, the comical and loving father of Hero (Jillian Morgese), the young woman Claudio (Fran Kranz) loves and wants to marry.  Gregg has a quick wit and is a joy to watch every time he is on screen.  He has a sparkle in his eyes that makes his character come alive and makes obvious the delight that he takes in performing in this movie.  Alexis Denisof and Amy Acker play Benedick and Beatrice, respectively, two other people brought together at Don Pedro’s (Reed Diamond) house, the setting of the film.  Benedick and Beatrice claim to despise each other, yet secretly love each other.  Denisof and Acker master Shakespeare’s language.  They speak it as if it is their own.  The barbs that their characters hurl at each other seem fresh again coming out of their mouths and sparks fly in their scenes together.  Like Gregg, they have great comedic timing and are no less great at physical comedy.

The editing, cinematography, and score of this film are the icing on the cake.  Whedon co-edited the film with Daniel S. Kaminsky and scored the film himself.  While much of the comedic timing and flow of the conversations can be credited to the actors, much of it lies in the hands of the editors.  They piece together conversations and control the flow of the entire film.  The witty scenes of dialogue are quick, and while many Shakespeare adaptations lag in pieces, this one doesn’t.  It feels far shorter than its 107-minute running time and is never boring.  Whedon’s score is very simple, yet effective and, for the most part, keeps the tone of the movie light and airy.  Jay Hunter’s cinematography is in beautiful black and white.  Much Ado About Nothing is very much a story that revolves around people sneaking around and snooping on each other, and Hunter’s cinematography emphasizes this by keeping the camera close to the characters at all times, particularly when they are listening in to each others’ conversations.  However, we feel as if we, the audience, are snooping on the characters, making each of us a voyeur.  We are looking in on these people’s lives as they are looking in on each other’s. 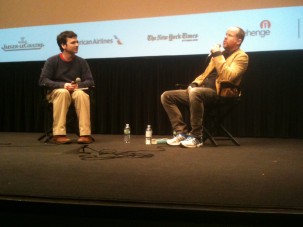 Mr. Whedon came to the screening of Much Ado About Nothing that I attended for a lengthy, and very amusing, Q & A.  He said, when asked why he chose to adapt Much Ado About Nothing of all Shakespeare’s plays, that he chose it because of practical reasons. The story takes place in one location, and he already could see who he was going to cast. He said that he wanted to bring out the dark subtext in the story and also illuminate Hero and Claudio’s romance which typically is overshadowed by Beatrice and Benedick’s.  Hero and Claudio’s romance, Whedon shows, is interesting and emotionally powerful.  In this adaptation, the emotional climax revolves around their love story.

Whedon talked much about his career and how working as a screenwriter at the beginning was killing him.  Script doctors would change his scripts so much that he was never happy with them.  He said that his scripts “read how they will look”.  When he saw that no one could direct his scripts the way he envisioned them, he decided to take charge and direct.  However, no one would hire Whedon to direct.  “I’ll hire me,” he said, and this is how his hit TV series Buffy the Vampire Slayer came to be.

When writing a script, Whedon decides to “find the new way in.”  He described how he wanted The Avengers to be a movie that had hints of The Dirty Dozen in it.  He wanted it to have war movie elements in it.  He wanted to show how this war takes a toll on the characters.  It is with this humanity that Whedon makes his films great.  Serenity, The Avengers, and even Much Ado About Nothing all could have been generic genre exercises, but instead they are living, fascinating films that are uncommonly smart and human.

Whedon also discussed his cancelled cult hit TV show Firefly and how when it was cancelled after just two seasons, he felt as if he had lied to his cast.  This show came out exactly as he had envisioned it;  it was his pride and joy.  It was very evident that the show’s cancellation is still raw and a sore spot for Whedon.  As for bringing the show back, Whedon said that he would be fearful of it because it will not be the same.  He said that no matter how great it may turn out, it would never turn out the same.

Much Ado About Nothing seems to be a response to Whedon’s hardships in the entertainment industry.  This project is something that he had complete creative control over and seemed to be a passion project.  It shows.  As incredibly entertaining and smart as The Avengers was, it seemed to be something that Whedon did not have complete control over.  While it contained his signature witty dialogue and his visual flair, it was, in essence, a big-budget action film designed to make money.  This film is a beautiful vision and one that feels like a labor of love.  It was not designed to be a box office smash and was not designed to become the new franchise.  It was simply made by a crew of people with a love and respect of Shakespeare and each other, and it is this love and respect that shine through.  Much Ado About Nothing may not seem like a massive film, and it isn’t, yet it is every bit as fun, exciting, and full of wonder as anything Whedon has ever made.  It shows a big-name director does not need a big budget to make a great film.  Most importantly, though, it is a fresh, inviting adaptation of Shakespeare that will make a new generation fall in love with his works.  Shakespeare’s works frequently earn a bad name because of their association with high school English classes that overanalyze them to death.  This Much Ado will hopefully show a new generation why Shakespeare’s works have survived for over 400 years and will hopefully expose this new generation to the warmth, wit, and power that are contained in his words.

Joss Whedon’s Much Ado About Nothing opens June 7 at the Film Society of Lincoln Center.