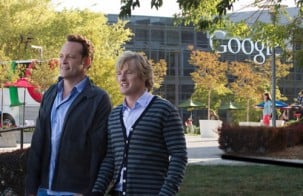 Owen Wilson and Vince Vaughn in THE INTERNSHIP

Shawn Levy’s (Date Night, Night at the Museum) new comedy, The Internship, stars Owen Wilson and Vince Vaughn and follows two salesmen who, when let go from their last job, decide to try to make a better life for themselves and follow their dreams by interning at Google.  The film follows a familiar plot structure, but is funny throughout, features memorable characters, and benefits greatly from strong comedic performances from the entire cast.

Most comedies nowadays rely on stupid sex jokes and a specific four-letter word that people and Hollywood screenwriters somehow think is hilarious if used in every sentence.  Well, I’m here to say it’s not.  Sex jokes can be really funny when used in the right way (look at The 40-Year-Old Virgin, Borat, or Knocked Up), but can become tiresome and repetitive when used as a substitute for real wit.  While The Internship is not ridiculously witty, it is very funny, mainly due to the eccentricities of its developed, memorable characters.  Writers Vince Vaughn and Jared Stern realize that character-driven comedy is still funny.  Remember movies like Tootsie and Groundhog Day?   These two films are still widely considered two of the greatest American comedies.  Why?  Because they had developed real characters who were portrayed by the best actors and were given great dialogue.  Vaughn and Stern’s dialogue is nowhere near genius, but it is still funny, and while the film’s message is nothing new, it is still good to hear once in a while.

The formulaic plot frequently threatens to derail the entire movie.  It, like so many other comedies nowadays, is so predictable that I knew the ending before the movie had started and figured out many plot points before they happened.  Along with an overreliance on sex jokes, Hollywood comedy writers seem incapable of writing a comedy with much surprise nowadays.  The Internship, though, makes up for much of its structural flaws with its charm and its performances.  Owen Wilson and Vince Vaughn hit it big with the 2005 surprise hit Wedding Crashers and proved to be a commercially successful, smart comedic duo.  The two have not led a movie together since.  In The Internship, they are extremely fun to watch and have something rare: comedic chemistry.  The two seem to have a lot of fun acting together and work well together.  However, they never overshadow their co-stars who are equally as funny and seem to enjoy creating their quirky characters.  Josh Brener plays Wilson and Vaughn’s internship group mentor, Lile, and steals every scene he’s in.  His perfect comedic timing and ability to make every scene he’s in awkward, yet funny makes him particularly entertaining to watch.

Finally, many have complained that the film is just an advertisement for Google, and I cannot deny that it is indeed an advertisement.  However, Google provides a hilarious backdrop for the film’s characters and, in a way, functions as a character in itself.  While Google and its products are in your face, it never detracted from the movie for me.

Overall, The Internship is a clever, well-acted comedy that made me laugh harder and feel more satisfied than most comedies that I have seen recently.  I would never defend this as a “great film”, but I would absolutely say it would be worth going to see.  Rarely do I have this much fun at a comedy, and this movie is proof that two good leads are essential to making a good comedy.

The Internship will be released in theaters nationwide on June 7.