I’d like to share some interesting interrotron information I learned from our client’s director for today: Glenn Martin. 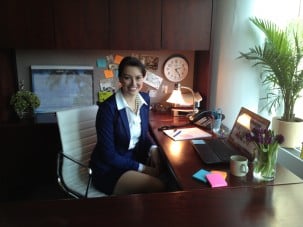 The Interrotron as many of you know is a device our Amy Bursor  used in her Executive Speech Coaching for Fortune 50 Companies, The United Nations and a lot of politicians, both on the local and National level.  It’s a wonderfully device that lets the talent look right into the camera but see he director or whomever is conducting the interview.  It’s usually best with inexperienced actors who are a bit intimidated by the camera and have a tendency to look off lens toward the sound of the person directing them.

With the Interrotron, correct eye contact is preserved and a hell of a lot of studio time is saved.

And best of all you get a much  better scene

Mr.Martin worked for years with the famed Errol Morris who, in case you’ve missed some of our earlier blogs, is the creator of the interrotron teleprompter set up.  Glenn describes Mr. Morris at the “eleven minute psychologist” in terms of his approach to working with talent as a director. This makes perfect sense given that the purpose of the Interrotron Teleprompter is to create a relaxed and personal connection between the talent and the director which is both facilitated captured through the camera.

This gives the viewer the impression that the actor on screen is looking directly at them – and connecting with them on a personal level. In addition to the interrotron equipment, it takes a special kind of director to make it work – Mr. Martin has had the privilege to train and work under the legendary Errol Morris and his connection with the talent proves it!

While working with Mr. Martin today he told me about how the interrotron teleprompter wasn’t actually “invented” by Errol Morris – he revealed that the National Football League (yes, that’s right the NFL!!) was the first to use what became known as the Errol Morris Interrotron Prompter.

Errol Morris might not have technically invented the set up – but he revolutionized it’s use atheletes before and after games, because the NFL found that when they simply stuck a camera in front of the Player’s face they tended to freeze up or become tongue tied (who wouldn’t become self conscious with nothing but a camera in your face). However, when the same Player was talking to a reporter directly he displayed none of those awkward behaviors. As a result the media division of the NFL rigged a set of monitors and cameras to allow the Players to see their interviews who we in another room- and thus the earliest interrotron set up was born- so they could interview the Players in the locker room or other locations during the games !

And that’s your newest piece of media trivia courtesy of today’s director Glenn Martin! Thanks again for the insider info Glenn!