With a Previously Shot Audience of Cheering Fans

Due to COVID-19, soccer fans are not able to crowd into stadiums to enjoy their favorite sport.

While the teams are still eager to compete, the vision of empty stands makes the matches far less exciting.

We have the technology to solve this.

We can composit previously filmed soccer fans into a 4K virtual stadium and combine that live with an actual soccer match in real time.

Thus, the camera would capture the players and our hardware/software solution would insert an audience of cheering fans into the shot for broadcasting in real time.

This is state-of-the art technology. 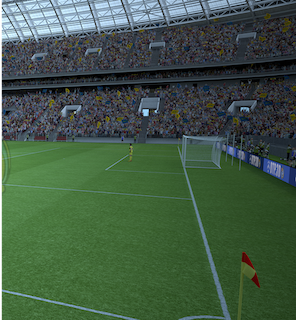 We recently used this technology for Universal Pictures to create a 4K big screen movie for the billion dollar + Jason Bourne ride at Universal Orlando.

As we are under NDA, we are not able to send video of the Universal / Jason Bourne footage until the park re-opens.

However, any of your staff can see the amazing Bourne footage as well as many other examples of this process at our NYC studio.

We can even do a live demonstration.

The video on the next page demonstrates both the high photo-real quality of our 4K virtual sets as well as the way we seamlessly combine live actors into the scene.

Until now, virtually all high quality Green Screen shots involving a moving camera were composited in post-production in a process called “cameramatch move”.

Our process changes all that.

We shoot and composit moving actors into a 3D environment with a moving, zooming, panning camera… in real time

While most digital audience technologies use digital actors… we don’t.

We film real people in a Green Screen environment.

A client requested us to insert real people into their CAD plan for a mall which had not yet been built in Paris.

The following video shows our ability to film real people and combine them with the client’s virtual environment. This was ten years ago.  We’re much better now.

We are The American Movie Company, LLC in a long time partnership with Jett Sets, Inc.

Bill is the Emmy Award® winning producer of the NBC series “Unicorn Tales” (winner of 18 Emmy Awards, and the prestigious Action For Children’s Television Award®).

Joe Jett is a 35 year veteran in the television industry. He is a member of the DGA and has also won several awards including an Emmy award.

He worked for 30 years in entertainment. This includes sports, soap opera and industrials for such companies as A & E, MTV, CBS, NBC as a director, tech manager and consultant. Joe works with Sesame Street and WWE and travels abroad as a consultant.

He currently operates Jett Sets in NYC which specializes in virtual and augmented reality design, implementation and production.  Most recently Jett Sets shot a video for Universal Theme Park in Orlando, Florida.

Purchase and Training Costs: The Technology

The “Live” Soccer Fans In the Stadium

Filming soccer fans and digitally inserting them into the stadium.