The world of film and television production is subject to constant change.   As we in the business know disappointment and rejection are daily rations. At times, we may set our sights on extravagant sets and multiple locations only to come to the realization that we aimed too high.  Budget constraints do not, in fact, align with the scope of our imagination.

Location changes and set interiors are both a costly and an annoying inconvenience.   The demands of such an uncertain, ephemeral situation may dissuade filmmakers from developing intricate scenes (necessary to depict their vision) which are costly and strain the budget.

Hope springs eternal!  Recent breakthroughs in 4K Virtual Reality (VR) technology may have given a new lease on life to these unfortunate and exorbitant setbacks.  As John Lennon said, “There are no problems, only solutions.” I like that hopeful outlook!

4K Virtual Reality Sets afford you the ability to navigate entire worlds at the helm of a computer system and a green screen location. One of those sought after locations is  Astoria Prime which houses Jett Sets’ newly updated 4K VR technology system.

American Movie Company recently collaborated with Jett Sets on an exciting project for a well-known blockbuster action film franchise.  Am unable to divulge even the name of the young actress who flew in from the West Coast. Suffice it to say that all involved loved their time in Manhattan and Queens.

If I may be a bit technical here… In order to film on the 4K virtual reality set, the state-of-the-art jib is equipped with several cutting-edge proprietary sensors to follow the talent while on the three-walled Green Screen Stage.

The equipment is state-of-the-art and the crew is adept at “Ray tracing”.  In computer graphics, the term refers to the process, the technique, the ability, if you will, to render images by tracing the path of light.  It then simulates the precise manner in which the virtual objects interact with the light. The result which you can see on your computer screen is the creation of more realistic graphics in Virtual Reality.

The creative, dedicated engineers at Jett Sets are able to customize sets per your desires. They also offer pre-built sets.  Both can be used in both single and multi-camera shoots. A client is able to maneuver between different sets in mere minutes, thus lowering what might be exorbitant, excessive production costs if done elsewhere and in other ways.

Moreover, at Jett Sets, live composites can also be created on the Green Screen Stage .  How? you may ask. By using a “super computer with state-of-the-art graphics cards, compositing hardware and the Unreal Gaming Engine”, proudly announces the man in charge!

Furthermore, this technology is not limited to the Astoria Prime location.   It can be moved and integrated with any Green Screen. An ideal world can be created for a client’s production needs at their chosen location.

The American Movie Company and Jett Sets are poised to assist you in creating what you’ve imagined. 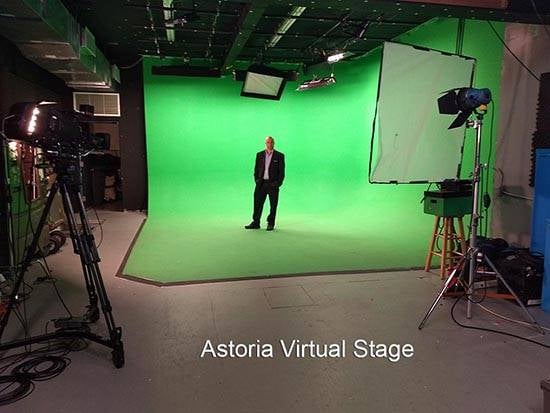