The Green Knight: Is it worth the trip to the theater?

The Green Knight from  A24 Studios, starring Dev Patel and directed by David Lowery is a fantasy film worth talking about. It’s a weird film, exactly what we’ve come to expect from this studio. The film is an adaptation of the late 14th century middle English Arthurian legend Sir Gawain and the Green Knight. Dev Patel is Sir Gawain,  a funny young fellow with knightly ambitions about to go on a quest that could change or take his life.  If you’re not familiar with the original story, this epic adventure tale will shake you up, confuse you, make you laugh and leave you with a sense of “what the hell was that?”.

Watch the trailer for the Green Knight below

I joined a group of my friends at the theater in early August to watch the Green Knight. I had not watched the trailers or read anything about the film beforehand and I was not familiar with the original tale. My friend did not tell me what to expect but she mentioned that I was in for a trip.

The film started with a lot of blue toned foggy shots depicting a medieval North Wales unlike any I’ve ever seen in film. Why? There were a lot of people of color playing characters in the film. I found this refreshing, especially with a wonderful actor like Dev Patel leading the story.  Usually, I’d find period pieces based on old tales boring from the start, but this film’s diverse cast did a good job in keeping me interested in the story; a  story which had a lot to digest and decipher.

Sir Gawain is king Arthur’s reckless and headstrong nephew who embarks on a daring quest to confront the Green Knight. The Green Knight is a gigantic emerald skinned, tree-like stranger who during the Christmas eve festivities disrupted the King’s court offering a challenge.  Gawain has to deal with ghosts, giants, thieves and schemers in what becomes a deeper journey to define his character and prove his worth in the eyes of his family and kingdom.

Spoiler alert! There’s a twist at the end that will make you either hate the film or think of it as a masterpiece. The friend group I went to the theater with in early August loved the film so much that a few of them went to watch it a second time. However, another group of my friends, the ones that are more animation oriented, disliked a lot of the CGI used in the film and complained heavily about all the VFX.  As both an animation and a film person, I did notice the off look of the special effects, but I appreciated the cinematography and the story enough to overlook it.

If you’re familiar with the Arthurian legend you’ll most likely appreciate the film’s bold and refreshing approach to the story. There’s a lot of cinematic gems that had me wondering how they accomplished such unique and visually appealing shots. There’s a scene with undescriptive giants, which you can see a bit of in the trailer, that I particularly did not understand or like. However, some friends have argued with me that that scene in particular is amazing. So there’s a lot of opinions in the film community surrounding  the Green Knight, and they all happen to be highly intellectual analyses.

All this talk about the Green Knight is reason enough to go watch it. The visuals will amaze you, even if the CGI and VFX aren’t up to par with the extra big budget film productions of this day. A24 may not have the budget that Disney has to execute perfect computer generated imagery, but this is a solid start. The story is solid, intriguing, and funny. Dev Patel as Sir Gawain has quite the humorous appeal. All that plus a cool looking fox!

At the American Movie Company, we love going to the movies and we love making them! Click here to find out more about our film production services. 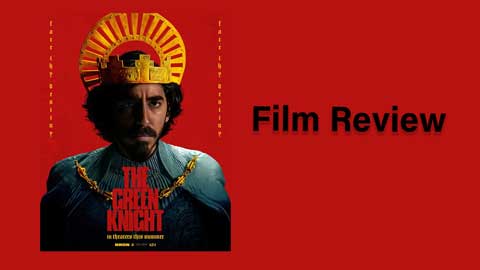