Oh, yes! It’s that time of the year again! Oscar nominations have been announced!

The Academy of Motion Picture Arts and Sciences has announced the contenders in nine categories for the 92nd  Academy Awards.  Some of the nominees this year have certainly sparked controversy throughout the worldwide web.  Consider some missteps, according to some:  The all-male best director nominees, Adam Sandler being snubbed for “Uncut Gems”.  These are the ones getting negative attention.  The  Oscars have once again made socio-political headlines. The debate about what the Academy considers the “best” each year is what adds spice to the gumbo whose main ingredients are filmmaking and the media. Food for thought!

In my view, people crave to consume content which fosters awareness and provokes thoughtful, well informed discussions of society’s  biases.  There’s a hunger in the crowd for films that strive to reconstruct, redefine and include those who have otherwise been excluded from the world of cinema.  The roar can be heard for films which truly reflect the true diversity that exists in our world.  All aspects of film must be inclusive, be it in terms of story, cast, and directing.

That being said, this year’s nominees have certainly made waves with their film work.  If I may, I have to brag about our prescience in writing about the Academy’s praised films and directors this year.  Click here for Quentin Tarantino Spills His Guts… about filmmaking.   If you need a little refresher about the film, I am here to serve it up.  Here’s a link to  4 Facts About “Once Upon a Time In Hollywood” You Did Not Know.  Feast on that!  It  should serve you right!

Without further ado, let us talk about the five Oscar nominated directors and their filmmaking secrets.

How Quentin Tarantino Keeps You Hooked.

As a director, says Tarantino,  he considers himself a part of the audience.   ” You can leave the bread crumbs that would indicate that you were going to go the way that all the other films had gone, and then all of a sudden you make a quick left turn and they’re not prepared for that.”  This is how Quentin Tarantino explains part of his plan.

This is a great video to watch because it breaks down the pieces that make up the look and feel of a Quentin Tarantino film and defines them as elements: Writing, production design, color, cinematography, editing, sound design and music.

Quentin Tarantino has a talent for writing interesting dialogue that shifts into captivating situations. He leaves open-ended questions and loose ends, then just when you think you’ve gotten a hang of a scene he attaches a surprise development. That’s how you keep an audience on their toes.

The secret to writing like Tarantino is to build natural dialogue that gives a natural voice to unique characters. Then, compose these interesting story lines with visual contrast and exaggeration. He likes to give his characters a trademark outfit, a uniform, that establishes their visual identity. Combine Tarantino’s production design with his use of color for emotional intensity and you’ve got a piece worthy of the Academy’s attention.

Martin Scorsese is all about character. More than anything he loves flawed characters. He crafts his scenes in a way that allows us to empathize with these characters because we trust that their intentions are pure, though we recognize the complex morality of their actions.

This is an excellent video that breaks down Martin Scorsese’s directing style. It shows just how Scorsese uses a unique approach to directing and filmmaking, as does the video above about Quentin Tarantino, this one takes on the individual elements that make up the whole: Story, production design, editing, color, sound and music.

Martin Scorsese places relatable characters in authentic worlds and surrounds them with raw gritty and realistic imagery. He dresses them in a way that makes you say “I know somebody that dresses like that”, it connects us to the characters and brings us into the story.

Scorsese was nominated for best director for “The Irishman”  which debuted on Netflix at the end of 2019. Some say it was the best film of the year, others say it was too long for our short attention span. Here’s a video interview of Martin Scorsese talking about the making of “The Irishman” that should give you more insight into this notable Oscar nominated director’s distinctive process .

Why Bong Joon-Ho’s “Parasite” is Gnawing at You and Taking Over.

Bong Joon-Ho’s “Parasite” is blowing up internationally and if you haven’t seen this movie yet, you best go out and watch it.  Our very own,  Leah Sammak, Senior Production Coordinator and writer at AMC, walked in the office one day raving about how great the film was.  We trust her judgement and several of us went to see it as well.  She was right!  The nomination for best director is deserved!  He is the only person of color in that category this year.

There’s nothing like hearing a director talk about his Academy award nominated film and his reaction when the world loves what he’s made. This video gives us an opportunity to get to know the director of  “Okja” and “The Host”, Bong Joon-Ho, and gather more insight into his brilliance.

Bong Joon-Ho talks about “Parasite” as being a universal film in terms of the  story because it deals with political topics that transcends borders. It’s a story about rich and poor but there’s something more that causes the audience to react with affirmation. The film is still screening in selected theaters so go see it, to find out why the audience at Cannes burst in laughter and applause in the middle of the film.

The film tells the story of an unemployed, Ki-taek and his family as they take particular interest in the wealthy and glamorous Parks family, insinuate themselves into their lives and get entangled in an unexpected series of incidents.

Now, I was a bit nervous about “Joker” after its premiere last Fall. I had written here, about Joaquin Phoenix’s interesting approach to the character and the high expectations building up to the film’s  premiere. Once it opened, there was an avalanche of mixed reviews, mostly from people that didn’t expect this film to be what it is, a deep character study of a disturbed person, ignored and tortured by society.  Joker is not your average super villain comic book action film. I didn’t know what to make of this, that is, until Todd Phillips got an Oscar nomination for directing the film.  So since I’ve been validated, I must say “I told you so.” to the haters.

In this video “Joker” director Todd Phillips takes us through the movie’s opening scene. He explains that the necessity of an unsettling, dynamic tension throughout the film was the driving force that dictated his artistic decisions. Phillips managed to create a truly frightening world through his choices for location, costume, makeup and lighting.

Sam Mendes’ film “1917”  has already won tons of awards, so it is no surprise that the Golden Globes winner for Best Director has also been nominated for an Academy Award for the same category.

“1917”  is a film about two British soldiers during World War I, who received seemingly impossible orders. In a race for time, the soldiers must deliver a message that can potentially save 1,600 of their fellow comrades.

What prompted director Sam Mendes to make a film about 1917? A curious AMC editor and writer asked. In this video Mendes discusses where he gathers ideas and admits to influences for his films and provides a good amount of insight about directing for the screen versus directing for the theater.

Throughout this article we’ve discussed the secrets of filmmaking from the Oscar’s 2020 Best Director nominees. When we talked about Quentin Tarantino, we highlighted the importance of writing unique and interesting dialogue that leads into dynamic situations and leaves loose ends and questions for the audience to follow. This serves to keep the audience interested and alert – on their toes, as it were!

When we talked about Martin Scorsese we discussed the importance of authenticity and creating flawed characters whose actions come from a complex morality, then taking those characters and placing them in raw, gritty and realistic worlds.

We heard from Bong Joon-Ho about why his film “Parasite” resonated so much with a global audience, because it deals with universal political issues that transcend nationality.

Then we dove into the opening scene from “Joker” with director Todd Phillips, to understand more fully about the relationship between actor and director, as well as what it takes to transform an iconic character such as the Joker and dive into its creation through the process.

Finally we get to talk about influences with Sam Mendes. We all know that films are a collaborative art form and are not made in a vacuum.   Directors as people must find the resources from which  creativity is derived.  In this video Sam Mendes discusses which films have influenced him and the differences between directing film and theater.

I hope that you take these secrets seriously and use them.  Perhaps you’ll make next year’s Oscar worthy film.  I believe in you!  The table is set, eat up!  Now, that’s a tip! 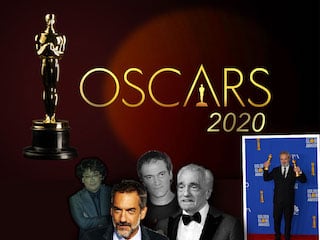