I’ve had a bit of a love-hate relationship with the GoPro HD Hero that we’ve used during the recording of the Car Tech Live podcast for the last year or so. On the one hand, the Hero takes phenomenal wide-angle video, is ridiculously durable thanks to its polycarbonate shell, and (when you get the settings right) relatively easy to use. However, that last bit is also my biggest point of contention with the first few generations of the GoPro Hero cameras; I’m a self-proclaimed techie who’s recorded hours of footage using the GoPro HD Hero and I still have to break out the poorly written instruction sheet to change any of the settings. More often than not, I just leave the settings where I left them and just point and shoot.

So, when the new generation GoPro HD Hero2 landed on my desk boasting an improved interface, I decided to challenge myself to full-test the device without cracking the spine on its (also improved) 90-page user manual.

The good: The GoPro HD Hero2 boasts improved optics, a few new video- and still-photo-shooting modes, and backward compatibility with current HD Hero accessories. Most importantly, its interface has been overhauled and is now much easier to view and understand.

The bad: As improved as it is, the Hero2’s interface can still be a bit confusing for the first-time user.

The bottom line: The GoPro HD Hero2 is easily the best GoPro camera yet, with the ruggedness and quality that we’ve come to expect and a new user-friendly interface.

Old design with a twist
Looking at the GoPro HD Hero2 side by side with the original HD Hero (hereafter referred to as the HD Hero1), reveals remarkably little change in the unit’s form factor. Both units are dimensionally identical and feature the same lens, power button, shutter button, and LCD screen placement. This means that any waterproof cases or lens covers purchased for the HD Hero1 will still work with the HD Hero2, which is a good thing for GoPro devotees. Likewise, both units feature the same rear hook and connection port for GoPro’s line of removable BacPacs, which we’ll discuss later. 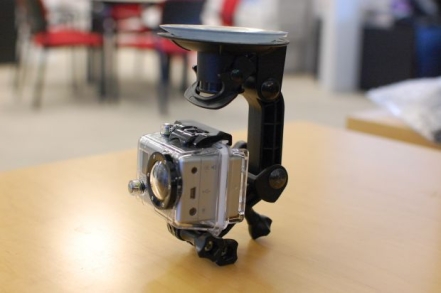 The HD Hero2 remains compatible with previous-generation GoPro accessories. Here it is fitted with a Battery BacPac and a suction-cup mount.

Closer inspection reveals that there’s more than the addition of the number 2 to distinguish the new model from the old. For starters, the Hero2 features a new glass lens that should be sharper and more durable than the old lens. Where the Hero1 featured only one red recording indicator LED, the Hero2 features four (one enlarged indicator on the front of the unit and smaller lights on its top, back, and bottom edges). On the right edge (when viewed from the front) are the connections for the proprietary video output, the Mini-USB port for charging, and a 2.5mm microphone input. Thankfully, these three connections are actually labeled this go-round. On the left edge are the full-size SD card slot and a new HDMI video output. Onboard microphones are now located on the top and bottom edges of the unit. Finally, the rear panel is where you’ll find the battery door that covers the user-replaceable 1,100mAh lithium ion battery.

I mentioned that the HD Hero2 ships with the same waterproof housing as the Hero1. For those unfamiliar with this housing, it’s a clear, polycarbonate shell that holds the Hero camera to whatever mounting option you chose to use. Spring-loaded waterproof buttons give users access to the selection and shutter buttons and a clear lens bubble protects the HD Hero2’s lens from scratches. In the event that this bubble is damaged, a replacement can be ordered and affixed with a small screwdriver. At the back of the shell is door that locks shut with a plastic latching clamp. (The plastic latch on our HD Hero1 busted after only a few weeks of use, so this bit worries me. Fortunately, it’s a relatively simple fix.) Users are given the choice between two easily swappable doors that ship with the HD Hero2. The first is a sealed waterproof door that keeps the camera dry, even when submerged to a depth of 197 feet. The second door is a “skeleton door” with openings that sacrifice waterproofing for increased sound quality.

The mounting options included in the box will depend on which HD Hero2 kit you pick up. The Motorsports Edition, for example, ships with a suction cup mount on an articulated arm and five adhesive mounts. The Surf Edition packs a pair of surfboard mounts and a special “Floaty” back door that will keep your camera from sinking to the bottom of the ocean in the event of a detachment. Finally, the Outdoor Edition includes a helmet strap, a head strap, and a selection of adhesive mounts. Additionally, additional mounts for handlebars, roll bars, chest straps, etc. are available from the manufacturer for additional cost. 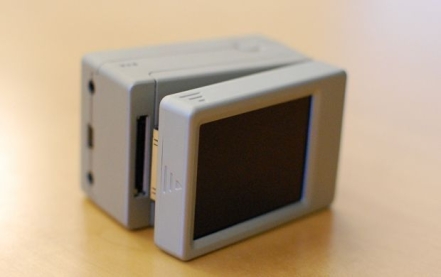 Users who want to add functionality can do so with addons, such as this LCD BacPac.

Same screen, new interface
Of all of the changes to the HD Hero, the most drastic is the overhauled interface present on the tiny monochromatic LCD. For starters the HD Hero2 uses larger, bolder icons for identifying the current recording mode. So tapping the selection button on the front of the unit fills the screen momentarily with a large icon for the newly selected mode that is easier to read with goggles on or at an arm’s length. When the moment is passed, the screen returns to its default state with a smaller icon indicating the mode and a new text-based setting identifier. So rather than memorizing that “R7” is 1080p video at 30 fps, the unit simply displays “1080-30,” which is much easier to decode. Likewise, photo modes are clearly identified with, for example, “5 MP 0.5 sec” which can easily be identified as “take a 5 megapixel shot every half second.” 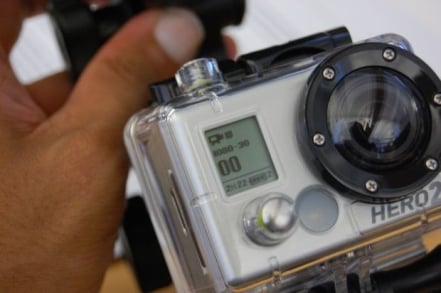 The Hero2’s new interface is much easier to decode and navigate than the previous generations’.

Likewise, the menu system has also been made clearer, with more easily identified icons for each setting that leads to a drop-down menu where the different options can be viewed clearly. Navigating the GoPro’s many options with just the select and shutter buttons is still an exercise in patience. For example, setting the date to 11:11am on 11/11/11 can take as many as 60 or more button presses. (Fortunately, the date is something you should only really have to set once.) That’s an extreme example, but even simpler tasks (such as changing the video or still-photo resolution) can take as many as 10 button presses.

On the bright side, the fact that the GoPro HD Hero2 even offers granular access to all of its settings right on the camera is an advantage that it holds over simpler camera systems, such as Contour’s.

There are still a few icons that don’t make much sense.  However, the important bits–changing the resolution of photos and video, setting time-lapse intervals–and the options that you’re likely to find yourself wanting to fiddle with before bombing down that double-black-diamond slope are extremely easy to understand.

I started the review with the intention of never cracking open the GoPro HD Hero2’s instruction manual and I’m pleased to state that I didn’t need to use it. (Although, I did flip through the manual and found that it is both more thoroughly written and better organized than the old sheet. So if you do find yourself needing help, it’s a great resource.)

Recording modes
So, we’ve discussed the chassis and we’ve explained that it’s easy to use, but what sort of video and photos can you expect to get out of this camera?