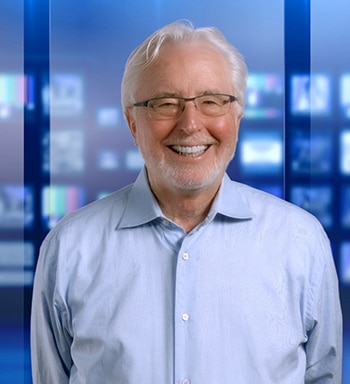 Bill is the Emmy Award® winning producer of the NBC series “Unicorn Tales”, winner of 18 Emmy Awards, and the prestigious Action For Children’s Television Award®.

Bill is the writer/director of over twenty feature films.

He was the New York production executive/production supervisor on a host of major motion pictures including: “The Mortal Instruments”  “Lucky Number Slevin”, “Third Miracle”, “Senseless”, “54”, and “The Late Shift”.

Bill is a former president of Sigmax, Inc. a Japanese/American film and TV production/distribution company.  Sigmax remade major Japanese Motion pictures in the US in English and dubbed hundreds of hours of Japanese animation into English and Spanish.  Bill oversaw was the North American creation, marketing and distribution of that content

Bill has BA degrees in Classical Languages and Philosophy, a BA and MA in English Literature and an MA and Ph.d ABD in Cinema Studies from NYU.

He is the owner of The American Movie Company and TelepromptertRental.com