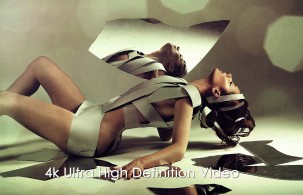 Well, we all know how fast technology changes and the latest buzz is 4K.

The good news is that 4K content is coming very soon and places like Europe and South Korea have it now.  The Olympics in Sochi was broadcast in 4K.   There are no 4K Blu-ray players yet which makes it difficult to play 4K discs on Blu-ray,  so a 4K TV may not be worth buying as of yet.  It would be better to have 4K become more of a standard and see how it fits into the business world.  Playing games in 4K is crazy, the extra power needed just to operate the system is costly.  Unlike  4K movies, 4K games take tons of power to operate .

Now, how much does it cost?  The first batch of 4K TVs were priced well over 10,000 each, but off brands 4K TVs go for under 1,000.  As for the computer monitors, they are very expensive. The Apple store has a monitor for 3,000. But as we all have seen after a couple of years in the market everything goes way down in price because another new item is coming to take the place of its predecessor.

So we ask ourselves, what is 4K?

It is a digital standard that calls for a 4096 x 2160 pixel resolution.  The first number is a horizontal measurement and the latter one the vertical.  Now the 2K  measurement is 2048 x 1080.  It is doubled in resolution the quality is outstanding, to say the least.  Yes, your 1080 TV is old already.  Let’s go over some of the questions often asked about this new technology.

It can if  you are using the right version.  The standard is 1:4 and Ultra HD resolution up to 24 frames per second.  Now to handle the higher quality HDMI 2.0 is a must and also HDCP 2.2 high definition copy protection as well.  Now,  in order for Ultra HD TV to display SD it must be upscaled to see the content properly.  Most Blu-ray players have a chip inside that converts DVD (480p) content into 1080 content so that it looks better on a 1080p TV.  Now we must convert SD and HD content to Ultra HD to fit all those extra pixels we have on the screen.  But for now, most of what we are watching is 1080HD or 720p content.

Where can we get a 4K set? If you own a Sony 4K TV and ask the company for the 4K media player you have access to over 140 4K titles.  At this point it may not be worth it.

What about 8K is this the next thing out? At the visual resolution of 7680×4320 8K will be 4 times the resolution of 4K, it’s not to say 4K is already on its way out even before it puts its feet on solid ground. The HDMI and bandwidth issues would have to be worked out to handle such a task.  We are looking down the road to 8K making a splash in the world of technology.

Let us ask the round table and get the details from a group of people that may change your mind.  John Bourbonais says in his recent article, “Why 4K is wrong”.  Mr. Bourbonais argues the point that 4K doesn’t add anything to the process or the product.  When 4K is available to the professionals and the consumers in postproduction does it add  any benefits to the user of the product?  Through the whole process is it easier and or better to go with 4K when the final product is the issue?  This comes from a PVC roundtable of a though process.  The ProVideo Coalition does bring some good ideas to the table about 4K.  The question is, do professionals need to shoot, edit, and deliver at 4K because of the perceived benefits?  Do consumers want to watch something at 4K because they’re  able to tell the difference between 4K and HD?  Or should moving to 4K (and eventually 8K) just be accepted as inevitable?

Let’s put this into the right perspective.  It is a quantum leap in technology.  We  are always looking for something better and sharper, finer and easier.  We are  just used to new toys,  and new products coming out.  We like the idea of being able to say we are the first ones using it.  We like having the first choice of something new.  The industry has made us all used to eagerly await and be curious about that new invention – we all want to know  – what will it be?  And they tell us it will be better than what we already have.   They know how to get us to spend more money to have  that new thing.  It is about sales.  Supply and demand.  If it is new and the manufacturer says it is new and better than what you have now, we as consumers want it.  We must have it.  It is better and they said it would be.  Yes, we are in the age of technology age and so we can be sure there will be a huge amount of new items for us to explore.

Matt Jeppsen says, “ For me, 4K is just another workflow choice.  It should be decided just like any other technical decision on a cost benefit analysis.  Shooters now have a plethora of choice in terms of bitrates, resolution, aspect ratio, and frame rates. These are decisions we have to make on every shoot, and 4K or not 4K is just another decision”.  When I put a system together I have to consider the financial aspect.

I would not use a system which overkills.  For example, I would not rent a Red cinema camera, avail myself of a high end editing system, use many grips, and or assistants for a simple job, say a wedding, that pays a mere $2,000 or so for the whole job.

Questions to consider:  Does the client need a flat or Raw image (or maybe they need a clean and pretty “pre-baked” look).  What resolution would serve the post-process best?  The use of 1080 or 2K is still very useful so delivering in 4K hasn’t really been a decision impacted to date.  Undoubtedly that will change in the coming months.

Clearly, we’re headed toward a 4K world, and that’s fine.  I certainly like HD quality over SD, so I’ll  certainly enjoy 4K over HD as well.  Just sit back and enjoy the ride.